Welcome to the annual Lullaby Pit “Best of” list. And damn, what a year.

The Slammy: CD of the Year 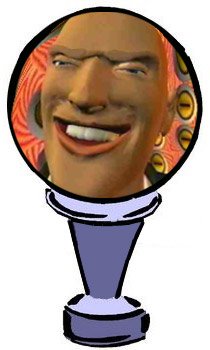 There’s just not enough I can say about this CD. One or two critics have gone so far as to invoke Born to Run in talking about Million Star Hotel, and here’s the cold, hard, truth: that’s not hyperbole. The difference between the level of success enjoyed by Foster and Springsteen is that Bruce was lucky enough to be born into the right era. MSH is every bit as great a disc, and if fate had switched the two men at birth, we might be here right now lamenting that an effort as spectacular as Born to Run was consigned to relative obscurity because the artist had the misfortune to be born too late. Foster’s master stroke is sweet, haunting, beautiful, painful…it evokes memories of driving an open road under a massive sky, alone except for the memory of love.

MSH is an indie release that would, in a just world, have sold 20 million copies by now. It’s the sort of record that, had it been released 25 years ago, every kid in your school would have had to have a copy, and you’d be awaiting word – any word – of Foster’s next release as though it were the most important news in the world. Million Star Hotel is that good.

Imogen Heap – Speak for Yourself
Most years this would be the clear Slammy winner. Heap’s alt/electropop solo effort is more musically ambitious than her Frou Frou side project (which treads a bit closer to the trip-pop trail blazed by Portishead, Mono and Saint Etienne), and its more experimental tracks are its most fascinating (“Hide and Seek” is an absolutely mesmerizing vocoder-driven a capella exploration, for instance). I guess I have a weakness for melody and aural depth of field. Or maybe I’m just a sucker for a girl with a synthesizer and pretty voice. In any case, it’s nice to see proof that pop can be intelligent and innovative.

Franz Ferdinand – You Could Have It So Much Better
With this outstanding effort FF has emerged as the best of the nu wave (for the moment, anyway – we’ll have to hear what the second offering from The Killers sounds like.) As is always the case with movements inspired by retro styles, a vast majority of the current bands taking their cues from late ‘70 New Wave and ‘80s electropop are essentially imitators. Their songs are wonderfully enjoyable for a guy like me, but there’s nothing new going on. The only question is who the tribute is to. Franz Ferdinand seems determined to be more than a glorified Holiday Inn Tribute to New Wave band, though. YCHISMB is simply a better CD in just about every regard, and unlike so many of their contemporaries, they’re sounding more like themselves than their influences with each new note they play. I’m going to be very interested in their next record – we’ll see if they can reach escape velocity.

Gorillaz – Demon Days
The first Gorillaz project was a collaboration, with so many players moving in and out that it was often hard to find the center. Which made it an interesting, if confusing listen. On the sophomore effort the “glorious commune” philosophy is gone – Gorillaz is Damon Albairn, and while he lets a lot of fascinating characters into the studio, there’s no question as to who’s in charge. And you know what – it works a lot better. As you’d imagine, the CD is more consistent end to end, but frankly the songs are better, too. As much as I loved the best of the debut, there was plenty there I had no problems ffwding through. That’s not the case with Demon Days. No, there’s not a single on it that touches “Clint Eastwood,” but hell, most musicians go their whole careers without ever writing anything that catchy.

Garbage – Bleed Like Me
Back when they broke in the mid-‘90s, Garbage was this innovative, powerful, smart rock alternative. Then after a couple records they disappeared, meaning that they became irrelevant, right? Uhhh, no. The music industry changed, from recording to new media to the collapse of radio to whatever the fuck went down at MTV, but for those of us who kept paying attention, Garbage kept on cranking out smart, powerful music. I can’t say this disc is especially better than any of the others, and maybe it seems less edgy because they’re not the new kids on the block anymore. But it’s a Garbage record, and a damned fine one, and it’s a shame that this has to come as news to anybody.

Eels – Blinking Lights And Other Revelations
I kind of run out of things to say about Eels. Put it this way – if they do a CD I want it and will buy it without feeling a need to sample. I know it will be smart as hell, I know the tunes will be clever and nuanced, and on the worst day of his life E is better than 99% of everything else you can find. BL&OR is less focused than previous efforts – it’s two discs and at times seems scattered by E’s standards – but there’s some order in the noise and it’s a wonderful experience searching for it.

Marah – If You Didn’t Laugh You’d Cry
Still one of the best bands in America, and sadly, still one of our best-kept secrets. With this record, the band takes a raw, stripped-down approach that emphasizes the detail of David Bielanko’s working class street poet act in ways that were less obvious on the last couple releases. It’s like if Springsteen had done The Wild, the Innocent and the E Street Hustle after Born to Run.

Death Cab for Cutie – Plans
You know, I heard a song or two by these guys a few years back, was unimpressed, and spent the last few ignoring them. Cheated myself, didn’t I? There are these wonderful moments when I think I hear echoes of alt from years gone by – The Connells, even the occasional bit that takes me back to a band like The Judybats. I guess the critical consensus is that Transatlanticism was the band’s seminal moment (so far – I see no reason to rule out spectacular work in years to come), but I’m honestly not sure I see Plans as a lesser work. In any case, the fact that Ben Gibbard can sustain this level of consistency over not only these two discs, but also his much-heralded side project, The Postal Service, says something very nice for those of us who value quaint, dated concepts like artist development.

Depeche Mode – Playing the Angel
Depeche Mode is an odd one for me – I think I have liked most everything they’ve done more than what they did before. More or less. Violator was a bona fide 5-star highwater moment, to be sure. Certain styles of music are defined by negative human qualities – despair, pain, rage, immaturity – and the darkish world of industrial is certainly one of those genres. This doesn’t mean that these styles don’t produce great work, but it does suggest why you rarely see artists with long careers marked by an arc of increasing actualization. If darkness drives you to artistic revelation, there’s a decent chance that happiness and growth and maturity will put a crimp in your muse. If there’s a rule in here somewhere, then Depeche Mode stands as one of its truly great exceptions. And “John the Revelator” is a strong candidate for track of the year, to boot…

A Great Disc That I’m Too Biased About to Rate

Paul Lewis – Trading Horror Stories
I have a rule – if I contributed to the disc, I don’t rate it, and I was fortunate enough to co-write “Bittersweet” for this year’s Paul Lewis release. (Needless to say, that’s my favorite track, although with everything Paul touches there’s no shortage of things to praise.) He possesses one of the finest pure rock voices in the business today, and has a knack for creating songs that perfectly serve its smoky blend of soul, funk and gravel. “The Marker,” in particular, captures the inherent drama of Paul’s acutely personal musical narrative, and I’ve been waiting on the re-work of “The Painting” hidden in the last track for years. Beautiful work, and highly recommended. Even if I am biased.

The following artists released worthy efforts in 2005. If I had a lot of spare time on my hands I’d tell you more, but for now, consider them recommended.