#ArtSunday: What’s the Greatest Book You Ever Read?

My buddy Jim Booth put together a quarantine reading list for our little S&R community this week and it got me thinking. So let’s pose a challenge.

What is the greatest work of literature you’ve ever read?

It can be a novel, a collection of short fiction, a book of poetry, a play (yes, Shakespeare is eligible), or a work of creative nonfiction.

You may discuss your criteria and thought processes and you may mention your nominees. No dissertations necessary. Keep it as short as you like.

But you must pick ONE book. No ties, no waffling.

I sort of instantly leap to Flannery O’Connor’s collected short stories, although that feels like cheating since it’s kind of a greatest hits thing. Still, goddamn, her insight into the South, the way she manages to develop such distinct characters in such a short period of time, and the enthusiastic meanness of her humor surpasses anything I’ve read.

I may have some sort of bias toward short fiction, too, because as great as The Scarlet Letter and Catcher in the Rye are I’ve always found more essential connection to the short stories of Hawthorne and Salinger.

Even though it’s genre, Marion Zimmer Bradley’s Mists of Avalon hit me squarely where I lived at that moment in time, as I wandered away from Christianity and toward Paganism. So that’s more about personal relevance.

Othello. Iago is perhaps my favorite character in the history of writing. There’s a library in there about evil and manipulation and how the powerful destroy the pure and good, and so that one seems especially relevant right now. 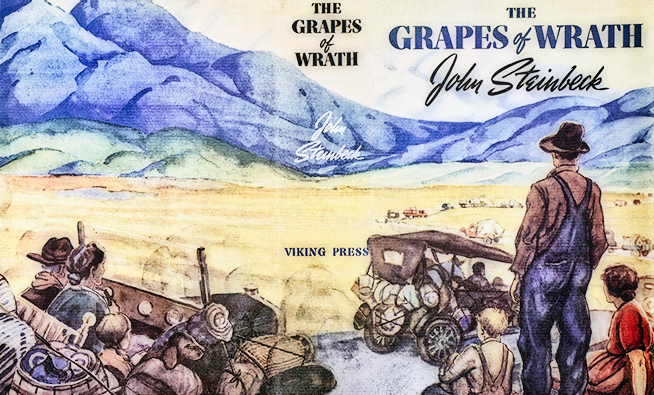 But if I have to pick one – and I do, because it’s MY rule – I’m going with The Grapes of Wrath. There’s no overstatting the importance of the Dust Bowl/Route 66 to California story in American history, especially now as the descendants of those dirt-poor migrants have transformed the state into its own emerging nation.

I’m not a reviewer. All I can do is think about Steinbeck delivering one body blow on top of another and the unfathomable perseverance of the Joad clan. For me there’s a psychological wonder in it because I’ve always figured there’s a depth below which I cannot sink, and if I get there I end it. But these people kept going because there wasn’t a choice.

I’m unworthy to even talk about these authors, and fortunately history has done better for them than I can. But that’s my humble take.