This is a song Charles Manson stole from the Beatles. We’re stealing it back. – Bono

Business issues have been much on my mind of late, and not just for the obvious reasons. Gavin (Whythawk) has pounded this space with a steady stream of posts that come at us from some really different angles. The S&R crew is largely American and progressive, but he’s African and Libertarian. Unlike many Libs I know, though, he’s not a creature of pure theory – he gets his hands dirty trying to drive investment at the bottom of the food chain in a place where the bottom is about as low as it gets on Spaceship Earth.

The result, for me at least, is that I find myself thinking about how years of fat cat scandal and abuse here in America has worked to make “capitalism” a dirty word among folks to left of center. END_OF_DOCUMENT_TOKEN_TO_BE_REPLACED

As any number of Facebook posts and memes have pointed out in recent weeks, we don’t wear masks to protect ourselves, we wear them to protect others. Our homemade cloth masks don’t do a great job of keeping the virus … END_OF_DOCUMENT_TOKEN_TO_BE_REPLACED

Uber says they’ll stop using Greyball. But this is only the latest outrage from America’s most incorrigibly corrupt business. Time to#DeleteUBER. As in, delete the company. Permanently.

The American corporation exists for one purpose: to “maximize shareholder value.” Thanks to a variety of factors, including a Supreme Court decision that codified this particularly sociopathic view, employees don’t matter, communities don’t matter, the environment doesn’t matter, and really the only commandment when it comes to bending the rules is “thou shalt not get caught.” END_OF_DOCUMENT_TOKEN_TO_BE_REPLACED

It’s now clear that democracy, as practiced in an anti-intellectual society like ours, doesn’t work. Let’s give elitism (properly understood) a try.

Many of you probably read Andrew Sullivan’s New York Magazine piece back in April. If not, you should do so as soon as possible – it’s among the most important and insightful political essays we have seen in a generation and will reward your time. I won’t even try to summarize his message, because no paraphrase I could provide would do it justice. Short version: the US is in trouble, and democracy is perhaps the reason.

Sullivan got me to thinking, in some depth, about where I am politically and how I got here. More importantly, where do I go now? END_OF_DOCUMENT_TOKEN_TO_BE_REPLACED

This is a song Charles Manson stole from the Beatles. We’re stealing it back. – Bono When we hear talk about “markets” and “capitalism” and “business,” especially as such things are fetishized in the corporate media (think about how The Apprentice franchise has apparently made Donald Trump, a barking conspiracy theorist whose companies have declared bankruptcy four times and who has flirted with personal bankruptcy, as well, into something of a corporate statesman), the mainstream of our culture tends to think we’re discussing the exclusive domain of Republicans. The GOP is assumed to be “pro-business” and all too often those who … END_OF_DOCUMENT_TOKEN_TO_BE_REPLACED Andrew Breitbart is dead at 43.

I’ve long thought that Mark Cuban was a really bright guy. He’s not omniscient, by any means – every once in awhile he’ll wander down a blind alley of an idea and I’ll wonder if he’s finally run out of smart. But my experience is that he usually bounces right back with something that makes a lot of sense. In sports terminology, he never loses two in a row, and that’s a formula for success.

I certainly appreciate that in an era of pathological greed, here’s a gazillionaire with clearly articulated progressive tendencies. He’s a guy whose employees seem to love him. He’s generous, apparently, and willing to spend whatever it takes to succeed. When it comes to competing, he’s always struck me as a man who adheres to the “self-interest, rightly understood” principle that de Tocqueville talks about in Democracy in America. I have no idea whether he’s even heard of de Tocqueville, of course, but he seems to get the underlying values, regardless. END_OF_DOCUMENT_TOKEN_TO_BE_REPLACED 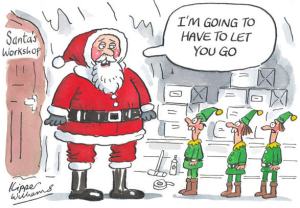 A few years ago I invented a word: euphemasia , a hybrid between euphemism and euthanasia.

euphemasia – noun: the act of putting the truth out of its misery by cynically substituting an inoffensive expression for one that is considered offensive or damaging to the personal, political or economic interests of the party using the term. Also, the inverse, cynically substituting an offensive term for a benign one in order to achieve personal, political or economic ends.

We Americans didn’t invent euphemisms, but we have become masters at putting the language to sleep, haven’t we? Or, more accurately, at using language to put ideas and good sense in their rightful place. For instance:

Academic When you get as many letters after your name as I have, you tend to pile up papers along the way. Here are a few of my more accessible academic moments. The Technological Sublime vs. The Frankenstein Complex: Utopia, Dystopia, and Christianity in the Great Internet Debate It started as a simple question back in 1994 or so: as this new Internet thing grows, why are the public pronouncements about it so damned polarized? Five years later the search for an answer had sifted through a lot of popular commentary; examined dot-com hoopla galore; encountered the thinking of a … END_OF_DOCUMENT_TOKEN_TO_BE_REPLACED

I come before you this morning with a morality play, a modern-day American fable. I’d call the following, which made its way to me a few days ago, a true story, but since I wasn’t actually present I suppose I can’t swear to its accuracy. I will say that the source is someone I have come to respect and trust, and I believe that what I am about to relate is, in fact, true, even if the facts are off an inch or two in places. So I’ll change the names to protect myself from malevolent whores litigious types and leave you to decide if it all seems plausible.

My source is a woman we’ll call Anne. END_OF_DOCUMENT_TOKEN_TO_BE_REPLACED

In case you’ve been off-planet, the dumpster fire that is Election Season 2008 is in full swing. While this can be entertaining if you’re cynical enough, it’s a process that can exert a warping effect on the perspectives of even the best among us.

In times like these, it’s often helpful to turn to the wisdom of the ages. Today, then, we offer a collection of insights on politics from some of history’s more astute observers of public life.

The endowed gift will help faculty members create class content and learning opportunities for students in the areas of ethical, social and environmental responsibility.

Dingledine also pledged $175,000 over the next five years to assist the school with current operations. He hopes the gifts will play a role in elevating awareness about how to conduct business in a way that recognizes the greater good.

“We need to instill in future leaders that it’s good business to give back,” Dingledine said. “My wish is for this value to be integrated into the fiber of the curriculum.” (Story.)

I’m honestly not sure what this means. I know what it means if I use language like this, but the sad fact is that where public companies are concerned, we have decided as a culture that the only guiding priciple for business governance is “shareholder value,” and even that has come to be interpreted in the shortest terms possible. This quarter, not next year, and damned sure not five or ten years down the road.