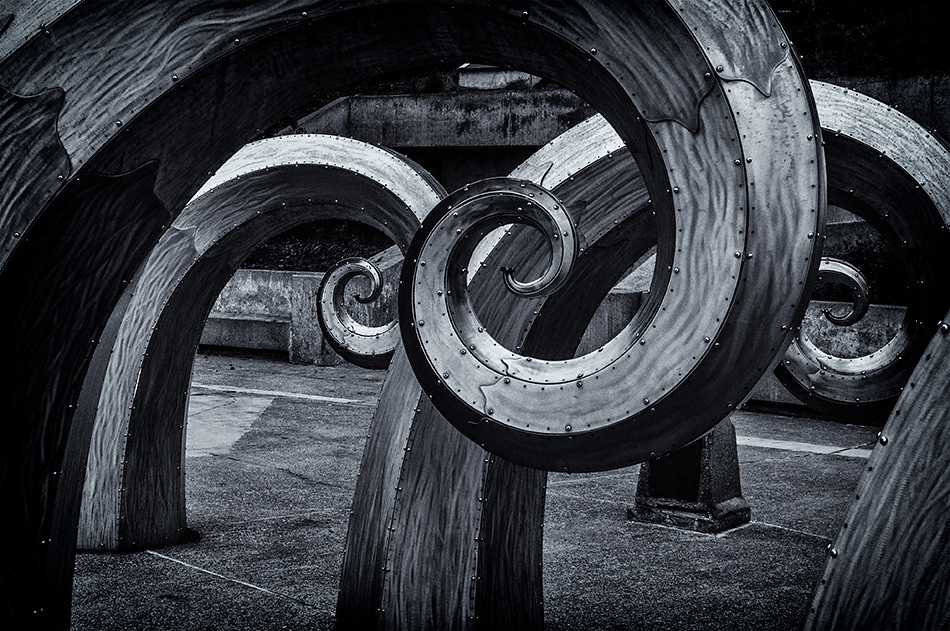 Dancing in the Snow

Here are three takes on a shot I took the other day at the Denver Art Museum. Some comments at the bottom.

It’s always fascinating to post multiple takes of a shot. Before I started doing it, I always imagined that if you asked a bunch of talented shooters what they thought of a particular image, the answer would be more or less the same. Consensus, at least. I’m not finding that to be true. I’ve gotten to where I expect significant disagreement, and here’s another example.

I posted these shots to 5280 Lens Mafia, a cool little photoblog community where many of my talented shutterbug buddies hang out. As the comments make clear, there is a lot to argue about, especially when you add in what Mike Pecaut (another mafioso) added on Facebook (he liked the second one).

I honestly don’t know which I like best (which is why I posted all three). In the third one, I have dramatically desaturated the building (that walkway is considerably greener in real life). I desaturated everything except the sculpture in the first one, going for a very contrasty, harsh winter look. In the second I wanted the same harshness, although with a softer finish, hoping for something of an old photo effect. I like all three, but for different reasons.

That there’s disagreement among my trusted colleagues is, in a way, gratifying. It isn’t terribly helpful, of course, but in the end the decisions have to be mine, anyway, which means I put it out there, hear what people say, and act accordingly.

END_OF_DOCUMENT_TOKEN_TO_BE_REPLACED

We can dance if we want to….

If abstract sculptures did the Safety Dance, I think this is what they’d look like.

ArtSunday: the nonlinearity of influence

“I’m interested in what motivates you, and how you understand the world.” He glanced sideways at her. “Rausch tells me you’ve written about music.”

“Sixties garage bands. I started writing about them when I was still in the Curfew.””Were they an inspiration?”

She was watching a fourteen-inch display on the Maybach’s dash, the red cursor that was the car proceeding along the green line that was Sunset. She looked up at him. “Not in any linear way, musically. They were my favorite bands. Are,” she corrected herself.

I’ve always been intrigued by the curious dynamic of influence. END_OF_DOCUMENT_TOKEN_TO_BE_REPLACED