Is Clinton really the practical choice to beat Trump? The data says no.

I keep being told that I have to get behind Hillary Clinton because she’s the only one who can beat Trump in November. That would be a more compelling argument if there were any evidence that it’s actually true. Instead, every single poll I have seen shows the exact opposite. Have a look at the latest from NBC News. 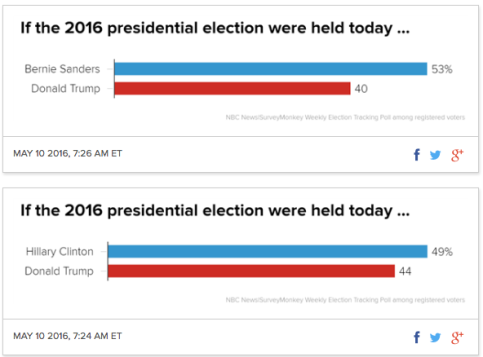 Now check the absolutely harrowing news from today’s Quinnipiac poll, which shows Clinton and Trump in a dead heat in three swing states.

That, ladies and gentlemen, could easily be all the margin Trump needs.

At this stage, can we stop relying on things that sound sensible and logical to us and pay hard attention to actual data? Please? The evidence says that Sanders, not Clinton, is the practical choice. Uninformed “pragmatism” may wind up having massive consequences for us all.