Tiger kills zookeeper because … the tiger had a set of keys? 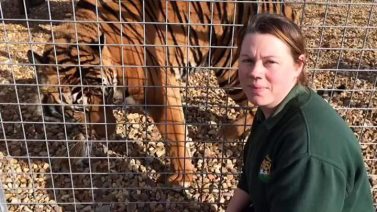 You probably noted the story about the zookeeper killed by a tiger in England the other day. This is a tragic story in every way.

It’s also a maddening example of inept cover-your-ass PR language by the Hamerton Zoo Park’s spokespeople. By now we should all be getting used to the fact that every official agency of any sort on the planet spins us, from governments to Fortune 500s to sports agents to the local school board. If you’re frustrated by the fact that you have take a magnifying glass to every official pronouncement you come across, join the club.

This story features an unusually ham-handed example of what I’m talking about. Zookeeper killed by tiger – your first thought is that something (obviously) went very wrong because tigers are dangerous and this one shouldn’t have been in a pen with a lone staffer. So what went wrong?

Here’s the line I’ve seen in every story I have read so far:

A tiger entered the enclosure where she was working and attacked her.

It was, of course, a “freak accident” and “visitors were never in danger.” (And yes, the Beeb is actually using the quote marks around “freak accident”; when the press does that, you have a serious credibility problem.)

So if I understand correctly, the tiger was wandering around the complex, hanging by the water cooler, chatting up the secretaries as it routinely does, and said hey, let’s see what’s going on in this room over here, right?

I’m assuming the tiger had a set of keys?

The only statement that could be possibly more ridiculous would be one that employed passive voice: “The enclosure was entered by the tiger.”

Here’s what they’re trying not to say. Somebody fucked up. Yes, it was a “freak accident” because somebody left a door open. Except if somebody did that, it wasn’t an accident, it was a mistake. An oversight. A monumental fuck up.

That somebody may or may not have been Rosa King, the deceased. If so, I think we all understand why you’d want to protect her. Problem is, you’re not going to succeed. At best you delay the revelation a day or two.

Whomever is in charge of crisis communications must have figured that if we don’t say we fucked up, nobody will figure it out. If we say “the tiger entered the enclosure,” people will think wow, what a bad break that was. I mean, one in a million that happens, innit?

I’d understand this level of official cynicism had it happened in the US because by and large Americans are dumb enough not to see through that ploy. 63 million of them, anyway.

But this is in Britain, where the average bloke is more critically inclined (well, except for maybe 15 million of them, give or take).

There are facts and they will be forthcoming and all the people who gave us that statement have really accomplished is to make clear that they aren’t very good at their jobs.

Information wants to be free. Stewart Brand said it and it’s still true. In this age of ubiquitous digital communications, nothing remains a secret. So get out in front of it.

If you don’t own the truth, the truth is damned sure going to own you.