I envy those of you with great fathers more than you will ever know.

It’s Father’s Day. In the past I have reposted my story on the day my father died. It’s a funny story, a sad story, an OMG story, a no fucking way that couldn’t really have happened story. If you haven’t seen it and want to, click on over.

Today, though, I want to say how happy I am for those of you who had great dads, and also to say thanks, on behalf of kids everywhere, to those of you who are great dads. I don’t know if you fully understand how much of a difference you make.

My father was not a great dad. He wasn’t the worst guy in the world, but…

He did get me a TV for graduation, though. But when he handed it over, he made clear that if anything happened – as in, if it got stolen, for instance – I was not to call the police. In other words, my graduation present was hot.

There’s more, and if you read the story linked above you’ll get a fuller picture. If you ever meet my youngest sister, for instance, ask her about getting skinned by her own father in a car deal that time when she was pregnant and she and her husband were trying to scrape together a little more money to afford the cost of the baby.

My grandfather, then, was my real father, and I honored his commitment to me by taking his name – Sam – when I filed those name change papers in January of 1989. And I can never say enough about what he did for me (he was far from perfect, too, but I owe so much of what I have become to him). Still, it’s hard for a man that age to be a real father, in the sense we think of it, because he and the kid have so little in common. He was born in 1913 and grew up through the Depression. I was born as the Space Age was picking up steam, and he couldn’t have had much reference to the decade of the ’70s when I was coming of age. We loved each other, but there was always an unbridgeable cultural gap.

I don’t want to suggest that Daddy had no redeeming qualities. While he was a bad father, he was a fantastic son. He took excellent care of my grandparents and made huge sacrifices in his own life to insure they were looked after. He and my grandfather had an obvious closeness that I never had with either, and while he was never anybody’s idea of a model child, my grandmother loved him as much as any mother ever loved any son.

He was also an honest man, in his own circumstantial sort of way. By this I mean that no matter how bad he was with me, he was always truthful. He never lied to me, ever. He never bad-mouthed my mother, and he always took responsibility for his failings as a husband. He was okay with me seeing these flaws, and I appreciated that – perhaps because there was so little else to appreciate, but still.

And he knew he wasn’t much of a father. In his defense, I think he loved me as best he could. One time, when I was 12 or so and we were at Myrtle Beach (one of only two times he ever took me on vacation?) I recall him tearing up and saying he loved me. This is the only time I recall him saying that, and maybe it wasn’t his fault that he had so much difficulty voicing emotion (or showing it). I have a boatload of baggage myself, so I get how we’re creatures of our conditioning. 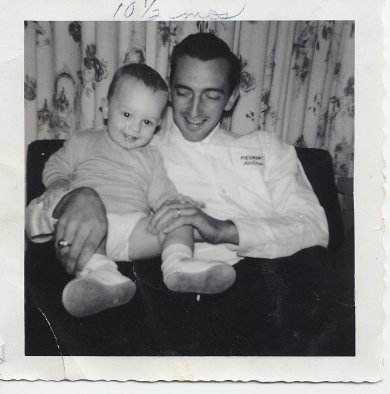 In the end, I guess I’m trying to say that Father’s Day has never been much more than a cruel reminder of what I didn’t have. When Daddy died in 1994, I was conflicted. On the one hand, it was my father. On the other … as hard as it is to admit, but his death roused in me not much more emotion than his life did. I was certainly anguished over his final days – his decline and passing were brutally hard and painful – but I didn’t honestly feel much beyond the obligatory. How many of us have relatives whom we “love” because they’re relatives. Maybe we don’t say “I love my mother.” Instead we say “of course I love her – she’s my mother.”

My sisters, I think, are a lot more charitable on the subject of Daddy than I am, although I know both have wrestled with some of the same issues their whole lives. And I hope, with all my heart, that they’re not sitting around this morning feeling the kind of ambivalence I am. I hope they don’t feel guilty for not feeling the way they’re supposed to.