Why should I, or you, or anyone else in the United States follow the law? Serious question.

One answer, obviously, is “because I don’t want to go to jail.”

Aside from “I choose to,” I believe it’s the only answer.

We live in a “society of laws” where the laws only apply to some people some of the time. If you occupy a certain place in the socio-economic hierarchy a law may not apply to you at all, whereas if you’re somewhere else on the ladder the same law may be used to deny you your freedom, your franchise, your ability to earn a living and perhaps even your life.

We live in a society where some are allowed to get rich for doing the same thing others are in jail for.

We live in a society where some can be gunned down in cold blood for no legal reason without their killers facing so much as a noise violation charge. 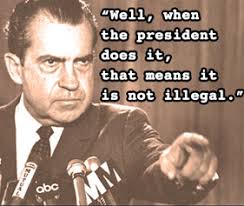 When Tricky Dick said it, even Republicans knew he was finished.

If you’re on the right team, you can be pardoned even after committing election fraud. Or obstruction of justice. Or overtly racist “law enforcement” policies. Or sparking armed anti-government crimes.

Some pay taxes and some don’t because tax codes are written by the wealthy for the wealthy.

If your father is the president not only do laws (and national security rules) not apply to you, trade policies are constructed so as to exempt your businesses.

You may even find yourself in a position to nominate a Supreme Court justice who firmly believes that presidents are above the law, period (at least until they leave office, after the damage is done).

As a youth I was almost pathologically law-abiding. Then I went off to a conservative university where a set of ridiculously arcane rules were applied capriciously by a couple of sanctimonious, neo-Puritan deans with more arbitrary power than would have been healthy even for good human being.

It changed me. I went from respecting the rules to breaking them every chance I got. During my undergrad career I went out of my way to violate those rules I mention above several hundred times and I was even guilty of breaking a variety of actual laws (in many cases indirectly – but hey, accessory is still a crime).

I’m thinking today, as I read about our president’s recent activities, about the character of laws, and in particular what moral obligation they impose on me.

My conclusion: I don’t think I have any obligation to follow the law at present. A code that applies to some and not others, and that excuses even the most egregious behaviors of its elites, that isn’t law. It’s privilege. It isn’t just, it isn’t moral, it isn’t consistent with the values of a modern, free society, and to put not too fine a point on it, it isn’t really a law at all.

That is, my decision as to whether or not to behave “lawfully” is a practical one, not a social, civic, ethical or moral one. It simply comes down to this: do I want to risk the consequences of possibly getting caught? If I’m well-positioned in society and have the right connections, there isn’t much risk. If I’m lower on the totem pole, the risks increase significantly.

The only moral obligation, from where I sit, is to make sure any hypothetical crimes don’t hurt the innocent.

I leave you to your own conscience. But I’ve always been governed by a sense of fair play that says we can play by whatever rules you like, but rest assured, we’re going to play by the same rules.