How can you be an artist when your muse hates you?

When the goal is to connect with an audience, it would be nice if your own creative impulses weren’t working against you, wouldn’t it?

’Course, they don’t all want singin’ or dancin’ or
caperin’ on a stage. Muses are slothful bitches, ’round here,
shivs or sawblades or
’round the corner with a sock full o’ sand.

Lizzy up the street last week?
Gutted like a haddock.
Which muse you reckon that was?

I’ve been an artist of one sort of another since I was a senior in high school.First I was a writer – mainly a poet – but five years ago I gave that up. Since then I’ve been honing my skills in photography and something I guess we’ll call “digital photoart.”

I always felt – and still do – that I was a good poet. I can share some work with you, if you like, so you can decide for yourself. But there is no way of arguing I was a successful poet. By any measure you can think of, my writing career was a failure.

I outline the problems in that retirement post, but in brief I suppose one of the biggest issues – perhaps the biggest – is that I was never a writer of the time. Poetry of my generation, heavily influenced by the Beats, was (in my view) banal, pedestrian and aggressively averse to symbolic depth.

Me, on the other hand… Thanks to my early influences my work was relentless Symbolist. It was imagistic and impressionistic and strove, at every turn, to avoid narrative. Unlike my contemporaries, I used bold, often complex language to convey drama. My writing was layered and my themes looked past the workaday humdrum of the world and offered visions that ranged from the passionate to the off-kilter to the deranged to the outright apocalyptic.

It’s who I was. And editors were having none of it, opting instead to publish ream after ream of safe, unambitious, homogenous little tripe drippings.

Okay, maybe I’m whining. Maybe I have an abandoned vineyard full of sour grapes. Maybe I’m way full of myself. And maybe I’m exaggerating the desolation of the contemporary poetry landscape a bit. But maybe, just maybe, not as much as you’d imagine.

That last book was built around three or four interwoven themes, one of which was my ars poetica. I honored my literary heroes, explored their influence on me, pondered the continuing nature of my relationship with them, and so. And in a couple spots, I explicitly addressed the concept of the muse. My muse. And the characterization of said muse wasn’t kind. The epigraph above is drawn from a poem called “The Muses of Whitechapel,” and the nastiness of the depiction I think caught even me by surprise. (And yes, “Lizzie” is in fact a reference to Elizabeth “Long Liz” Stride, one of Jack the Ripper’s victims.)

The other snatch of musing on muses happens here:

So my muse, she and I, we have some dysfunctionality in our relationship. A couple years ago I talked about the capricious nature of the muse, but at that stage I hadn’t begun to think of inspiration as a hostile force.

My photography has actually been wildly successful when compared against the standards of my poetry. I’ve had shows. I’ve sold a good number of pieces. My most popular shot now hangs on the walls of more than 50 homes (or sits behind a pile of junk in the basement – hard to say for sure). I’m not getting rich or famous, but generally speaking the response has been gratifying.

Thing is, the work that has been the most successful isn’t the work I find most interesting (or that I’m best at). Instead, the muse has led me down paths that are lush, beautiful, compelling, socially significant, and … totally uninteresting (or worse) to most people.

For instance, I’ve fallen in love with certain types of dark, macro floral work. Take this orchid, which is one of my favorites:

I’ve shown it multiple times and never come close to it selling.

Of late, I’ve been exploring a variety of darker, tech-processing-heavy digital arts. For instance:

I haven’t hung this yet, but the online response when I posted it was sort of meh.

And especially, there’s my recent series of vintage doll pieces. Which apparently creep people the heck out. I recently posted a query to Facebook to the effect of “y’all don’t much like my dolls, do you?” The no votes didn’t win unanimously, but they won convincingly.

Yes, some of them are intended for horror/creep factor, like this one from a few days ago:

Others, though, strike me as simply lovely. Nothing scary or freaky at all – just loving treatments of pretty antique cultural artifacts. Take these variations on a theme, for example: 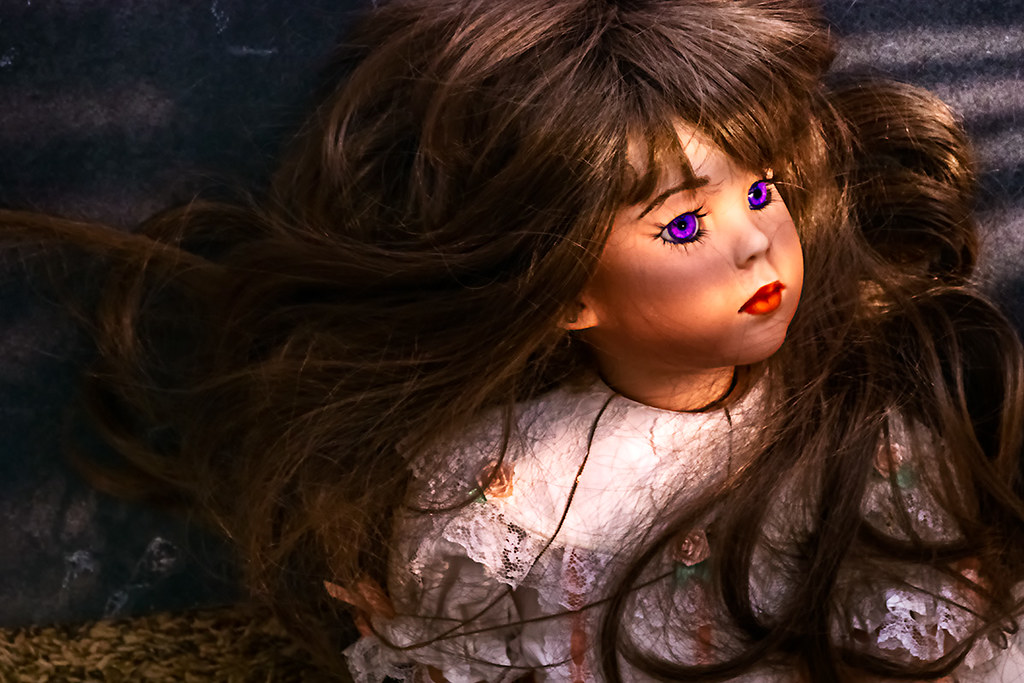 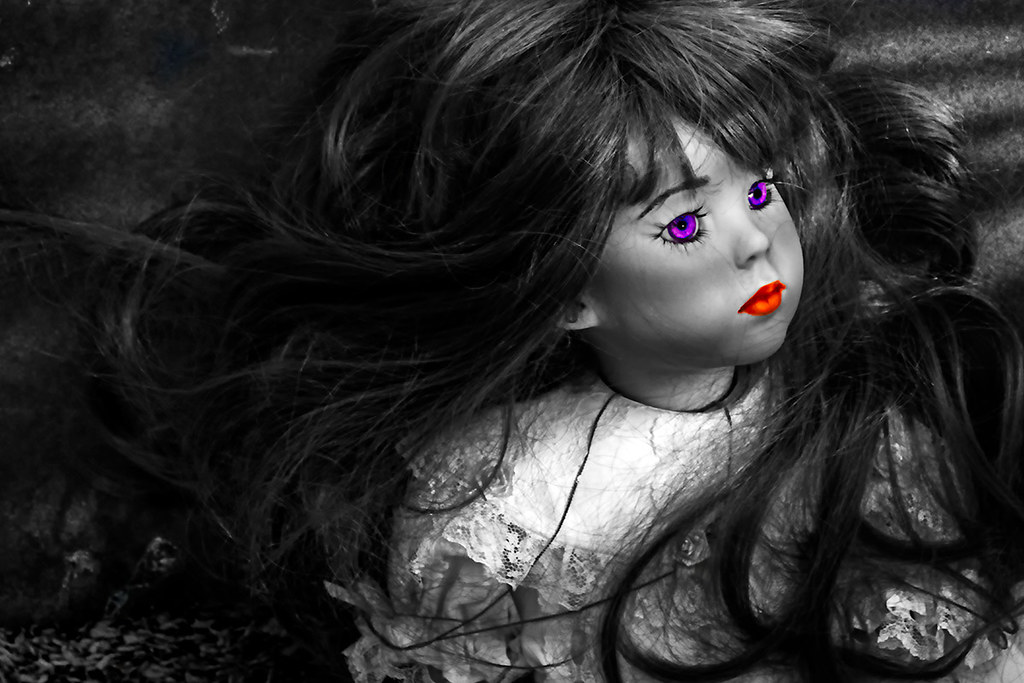 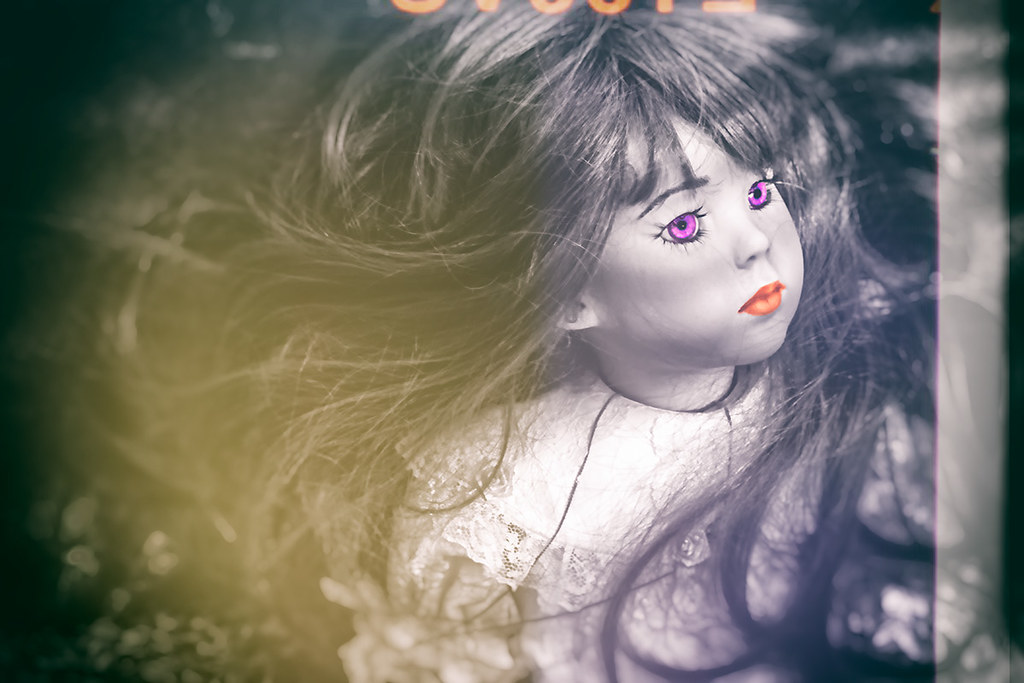 I’m not sure how you read these images (you can find the more or less complete set here), but I assure you that, as with my poetry, there’s a good deal going on thematically, primarily revolving around the complexities of childhood – from wonder to joy to exploitation and abuse. Not all of it is pleasant to think about, but there is an artistic agenda at work.

In other words, my muse has led me down a path full of lush, gorgeous, striking, unsettling, rich, compelling art. That many people can’t even look at without getting the willies.

Conclusion: my muse hates me.

I have a couple folks who are fans of this series, and one of them (may the gods bless her) has even expressed interest in buying a couple.

But I haven’t wandered into a mass market opportunity here. I may find a home for few, but mostly my darker work is going to be of me, by me and for me.

Being an artist is what it is. You don’t do it because you expect to get rich. Still, when the goal is to connect with an audience, it would be nice if your own creative impulses weren’t working against you, wouldn’t it?