WTF is up with the Weather Channel app?

Why doesn’t the Weather Channel at least agree with itself? 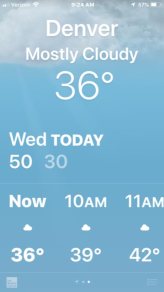 Like many (most? all?) iPhone owners I have the Weather Channel app. (It comes installed on the phone and it’s easy enough to work with, so I use it.) But there’s always been something about that I don’t understand, and today the oddness has gotten the best of me.

It always displays a default screen showing the weather in your location. If I’m home it shows Lone Tree. If I go into town it shows Denver. Cool. You can also add screens for any other location you like. If you’re from Philly and want to know what the weather is like at mom’s house you create a Philadelphia screen. Again, easy to do.

I have set up a Lone Tree screen so that if I’m somewhere else I can quickly check on the weather at home – which is handy if I’m up at my buddy’s house in Westminster and we’re have a snow storm. I can see what I’ll be driving into. All of which is great. Huh? Is it 32° or 34°? Shouldn’t the Weather Channel app, in principle, be consistent, you know, with itself?

Then it got weirder. Yesterday the app was predicting snow for Friday, I noticed that has changed to cloudy. I mentioned this to my girlfriend, but she said no, it’s still showing snow.

So we got the phones side by side and compared. The first thing we noticed was that our default location temps were off (normally default matches default and set location matches set location, so this was new).

Then we looked at the Friday forecast.

Is it snowing Friday or not? I have no idea, and apparently neither does the Weather Channel.

Like anyone who grew up with local TV weather forecasts, I’m used to disagreements. Frank Deal on Channel 8 says it’s going to rain, and the blonde woman over at Channel 2 whose name I can’t remember says nope, gonna be sunny. Somebody is wrong and it will become fodder for future promos touting the accuracy of one station or the other’s forecasts.

But after Frank said it was going to rain, he didn’t turn right around and offer up a sunshine and daffodils rebuttal to himself, did he?

None of this is really a big deal, of course. What’s a couple degrees, and this is Denver so snow vs no snow only matters if we’re talking a foot or more. And out here any forecast more than a couple days into the future is speculative fiction anyway. So I’ll probably survive this small instance of befuddlement.

But something strange is going on. I’m sure there’s an explanation, and I’d like to know what it is.

I’d hate for something to compromise my inherent faith in the sanctity of data.