ArtSunday: It’s time for Everything is a Photograph Day #eiapd

What do you do when you live in Denver, Colorado and you can’t think of a thing to photograph?

My creativity has always run in cycles: explosive bursts of vision, cooler periods of crafting, and long fallow times when my hateful phalanx of muses go walkabout.

I imagine most artists are kind of like this, and the first two stages, where I work on turning the raw stuff of vision into something finished, this works well. The problem is those long, dead periods where I want to be creative but just can’t.

My own innate tendencies contribute to the artistic desolation. A former writing professor once told me that every subject was worthy of poetry. That is, there were not appropriate and inappropriate topics. Everything in life was potentially a locus of art.

I never believed it. In my mind art is about beauty, hope, loss, aspiration, love, hate, death, war, etc. In this I suppose I reflect an old, traditional mindset that is, in its way, very conservative.

The Modernist era, though, began opening us up to the idea that “normal” things could be the stuff of art. In my view, “normal” very rapidly descended into banality.

This shift had obvious implications for the language of poetry. Mary Oliver, one of our greatest poets, famously said poetry “mustn’t be fancy,” and hers wasn’t.

“Mary Oliver isn’t a difficult poet,” [writer Ruth] Franklin says. “Her work is incredibly accessible, and I think that’s what makes her so beloved by so many people. It doesn’t feel like you have to take a seminar in order to understand Mary Oliver’s poetry. She’s speaking directly to you as a human being.”

Oliver told NPR that simplicity was important to her. “Poetry, to be understood, must be clear,” she said. “It mustn’t be fancy. I have the feeling that a lot of poets writing now, they sort of tap dance through it. I always feel that whatever isn’t necessary should not be in the poem.”

While I never had any qualms with the theory, per se, and while I regard Oliver as one of the best poets of the 20th century, I always felt art should be … I don’t even know the right word. Significant, dramatic? I’m a Symbolist to the core, and my own writing attempted to connect the here and now to a larger, Jungian world of iconic meaning. Sometimes my language was plain. Sometimes it aimed for the top end of our current usage. Occasionally I adopted the voices of archaic characters, or the obviously deranged. I was frequently quite dark and could be apocalyptic, plumbing the visions of those whose bodies were broken by this world and whose minds were now elsewhere.

And I’m certain in the view of most editors, it was altogether fancy. That’s never how I saw it, but my opinion didn’t matter. I was a fancy-pants poet in an age of grit and banality. 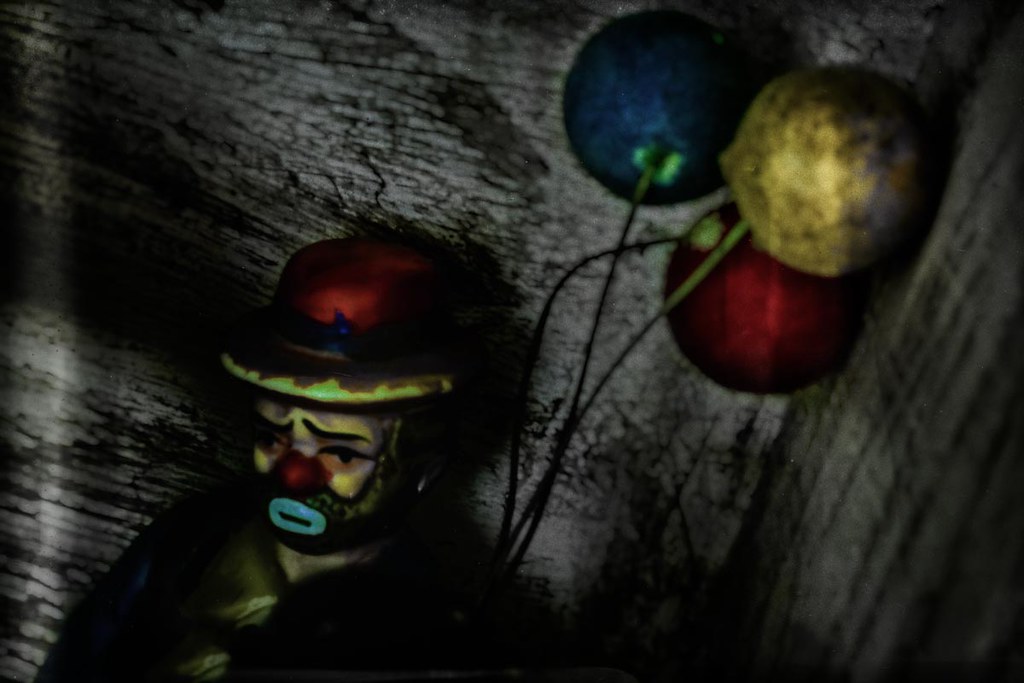 I fear my photography is sort of the same. I‘ve certainly shot “normal” things – landscapes, horses, flowers, classic cars, trains, architecture, urban scenes, and the like. But my visual art is like my writing – I’m drawn to the unconventional, the unreal, the darkly beautiful and occasionally twisted world of the symbol, and I suspect my visual language is as fancy as the textual.

I don’t long to be normal and I’ve long since given up on being famous. But I very much feel like my innate makeup and my artistic character are causing me to sometimes miss things. Important things.

You know how sometimes you can stand in front of a full closet and think “damn, I don’t have a thing to wear”? Or it’s getting toward dinnertime, you’re starting to get hungry, and you’re thinking how there’s just nothing to eat in the area, despite the fact there are 100 restaurants with a couple miles of your house?

I’ve been in one of my fallow periods of late and I can sit around unable to think of a damned thing to photograph. Nothing, zero, nada. Understand, I like in Denver. In Colorado. And there’s nothing to shoot.

So yeah, it’s not the place, it’s me. And it drives me crazy looking at the work of other photographers who manage to find a shot in just about anything. I walk past a million photographs a day without seeing them, I suspect, and it’s because my mind doesn’t think certain things are worthy subjects for art.

Perhaps part of me wanders the world looking for pre-existing symbolic revelation when I should work harder forging them. I’ve accused writers like Wallace Stevens of being fascist in their quest to impose their own intellectual order on the natural world, but maybe I’d benefit by taking a step or two in their direction. I mean, if Quantum Theory is right, there is no “reality” aside from what I make through observation, right?

And looking honestly back on all that stuff I spent 35 years writing, I’m probably more like Stevens than I’d readily have admitted a decade ago.

I think it’s time for Everything is a Photograph Day.

I need to get in the car, drive around randomly, stopping periodically to take shots of things that my mind doesn’t think are art. Then I’ll come home and see if I can do something with them.

I believe I’ll need to set my usual workflow aside. Right now I have a well-defined set of steps I use for processing an image. I run the shot through a series of software packages in a more or less established order, and when I’m through I have a photo that looks very much like it’s my photo. I have a look and if you review my work you’ll probably get to the point where you could recognize one of my shots even if you hadn’t seen it before. Lots of artists are like this. Most, in fact.

But it would be good for me to shoot things I don’t normally shoot and process them in ways I don’t normally process to see if I can broaden my horizons. That was the stated mission nearly seven years ago when I bought my first camera: shoot everything, because in that way I can discover who I am.

Over time, though, I have gotten to at home with a refined notion of who I am. It’s time go exploring again.