Kent State and 75 Minutes That Changed My Life 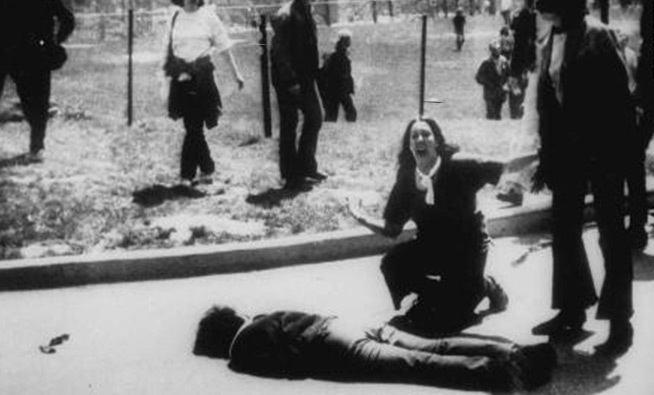 I was nine when Kent State happened. I was a very current events-minded kid and read about it in the paper and saw the news. But I didn’t really understand it all.

So I absorbed the narrative around me: buncha damned hippie punks got what they deserved.

The event was never a big deal in my life. I grew up “knowing” what I’d heard.

Then, in college, I had a Sociology prof who, we learned, had gone to Kent. In fact, he’d been on the organizing committee for the rally and had graduated the year before. He had first-hand knowledge of basically everything. We talked him into taking a day and doing a presentation for us.

This was a Tuesday/Thursday class, an hour and 15 minutes. Most students preferred the shorter (50-minute) MWFs, but this one could have held our attention for days. None of us wanted to leave. Everybody wanted to know more.

That 75 minutes changed my life. My time in school had already made clear the world wasn’t always what I’d thought it was. But … armed National Guardsmen opening fire into a crowd of unarmed undergrads. Kids who were a lot like us. Kids heartbroken and outraged that other kids a lot like us were coming home in body bags.

A lot of the Kent State story hadn’t made it through Davidson County, NC’s hillbilly filters. The protesters were nowhere near the Guardsmen and posed no danger. The soldiers weren’t under attack. And if they were, why did they shoot in the opposite direction from where they said they thought they heard gunfire?

Two of the four dead weren’t even part of the protest.

The other two, Sandra Scheuer and William Knox Schroeder, had been walking from one class to the next at the time of their deaths. Schroeder was also a member of the campus ROTC battalion. Of those wounded, none was closer than 71 feet (22 m) to the guardsmen. Of those killed, the nearest (Miller) was 265 feet (81 m) away, and their average distance from the guardsmen was 345 feet (105 m).

Scheuer’s normal path to class took her directly through the area of the protest but that day she’d gone out of her way to avoid it.

I’m not here to belabor you with all the details of the tragedy. If you’d like to know more start here. I just want to mark the occasion – it was 50 years ago today – by remarking on how very wrong we sometimes get the current events and history of the world we live in. And on how very many people there are out there willing to mislead us.

A curious mind. A willingness to think critically. A good-faith acceptance of your own fallibility. The world will fail you, but these three friends never will.