NASCAR’s Nuts Are in a Vice

NASCAR this week announced they’re banning the Confederate battle jack from all properties and events. Ray Ciccarelli, who was in witness protection on the truck circuit, immediately announced he was quitting in protest. The drama continued this morning as Jimmie Johnson, Bubba Wallace, Ryan Blaney and Kyle Busch said they were severing their relationships with a helmet designer who decided to double down on heritage racism.

I imagine NASCAR’s offices are a bit stressed right about now. The organization finds itself between the proverbial rock and a hard place because it’s butt-simple to go to any race and get photos of any sponsor logo you like in the same frame with the Confederate flag. If you’re a sponsor, we have now reached an inflection point – is your market going to be limited to that crowd? If so, all is good. But if you fancy yourself a national brand, well, let’s just say your competitors and customers can beat the shit out of you with optics. 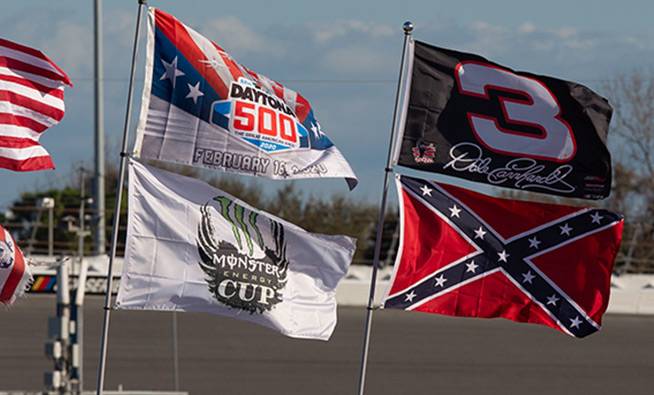 My guess is this has been a subject of discussion in corporate meetings around the country this week, and if it hasn’t it will be shortly. McHugh and his fellow brand execs are certainly smart enough to smell a storm this big brewing.

The teams themselves are in a pickle, too. Sponsoring a car for a season runs eight digits, and “regional” brands simply can’t pay that kind of freight.

But you can’t alienate your fan base… And let’s be really clear here. On an average race weekend we can walk through the gate, hit the stopwatch and I can find you a “South’s Gonna Rise Ag’in” belt buckle in under a minute.

So yeah, NASCAR has a serious devil/deep blue sea problem. They imagine themselves a national sport and have worked relentlessly for decades to grow beyond their Southern working class roots. But when push comes to shove, a huge chunk of their fan base is ideologically at odds with the marketing goals of the companies that pay the bills.

They’ve extended beyond the South, but they haven’t outgrown the class base, which remains significantly … red.

NASCAR is what it is and the days of having their cake and eating it too are likely behind them. They have to make a choice and either way it’s going to cost them money.