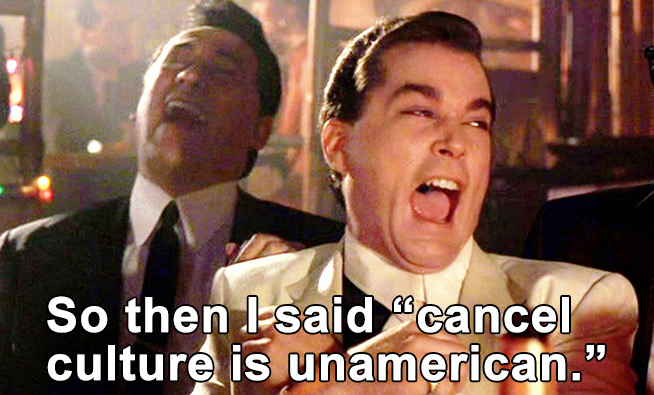 I’m getting a little tired of this “cancel culture” nonsense.

The term originated with the #MeToo movement, which targeted the likes of Bill Cosby and Louis CK, men whose history of misogynistic behavior led people to (justly) withdraw their support for the offenders’ careers. But while the term is newish, the tactics it describes aren’t. Canceling is another word for boycotting, which has been around forever.

When you hear people complaining about cancel culture, ask yourself some questions.

Did they squeal when the victims were “Hollywood liberals” like Harvey Weinstein, or Cosby, or Louis CK, or Charlie Rose, or Kevin Spacey, or Andy Dick, or Matt Lauer?

Did they rush to the defense of Al Franken when he was compelled to resign his Senate seat, even though there was reason to question the credibility of his accuser?

Do you ever recall hearing a word from them back in the day when Jerry Falwell was perfecting cancel culture with consumer boycotts targeting those who refused to climb aboard the “Moral Majority’s” prig wagon?

Or does the wailing and righteous gnashing of teeth only crescendo when the victims are Trumpists?

Are the pearl-clutchers more concerned with the plight of conservative billionaire profits than they are children in cages?

UFC fighter Jorge Masvidal, who lost his title challenge against Kamaru Usman on Saturday, is the poster child for a certain strain of selective outrage.

In pair of Tweets on Saturday, Masvidol expressed support for Goya Foods, taking aim at the those calling for the boycott of the Spanish foods company and linking to a story about Goya donating a million pounds of food to at the time of 2018’s deadly Hurricane Maria that devastated Puerto Rico.

“Actions of @GoyaFoods speak louder than the #woke mob. My people don’t get influenced by those that don’t know. They’ve been helping our people when we needed it most.”

Listen, we applaud any company – Goya included – that pitches in to help disaster victims. But did Masvidal ask himself why Puerto Rico so desperately needed Goya’s help? Did Goya Foods CEO Bob Unanue, whose Rose Garden fluff job set this whole episode in motion?

The hypocrisy is deafening.

It’s absolutely true that some lamenting what they see as the divisive impact of cancel culture are being sincere. Some people I respect, some of my friends who genuinely yearn for a more united society, believe it’s corrosive and that it’s making matters worse.

I value their empathy and essential good faith, but I don’t share their hopefulness. My plea to them today is this: stop. When you use that phrase, you’re reproducing a meme that has been appropriated by the Right for cynical, malignant purposes.

Talk about how we can work toward greater enlightenment as a nation, but please, be more critical about who’s saying what, what words they’re using, and who that vocabulary is carrying water for.