Predicting Chelsea’s Starting 11 for Next Season (or, Trying to Read Mourinho’s Inscrutable Mind)

Like everyone else with a blue shirt, I’ve been thinking about what Jose Mourinho’s reappointment will mean for Chelsea next season. Players are always coming and going, and this is never more true than when a new manager comes in, especially when that manager has a very different philosophy than his predecessors. History doesn’t suggest that we should expect a fire sale – The Special One has a long track record of building intelligently around inherited talent – but it’s also true that the roster, as currently comprised, is lacking in certain areas that Jose 2.0 is going to want to address.

So, what do I think next year’s squad is going to look like? I have taken what we know about Mourinho and factored in the existing squad and the rumors we’re hearing (the credible ones, that is) and made some guesses. Here’s one possibility. 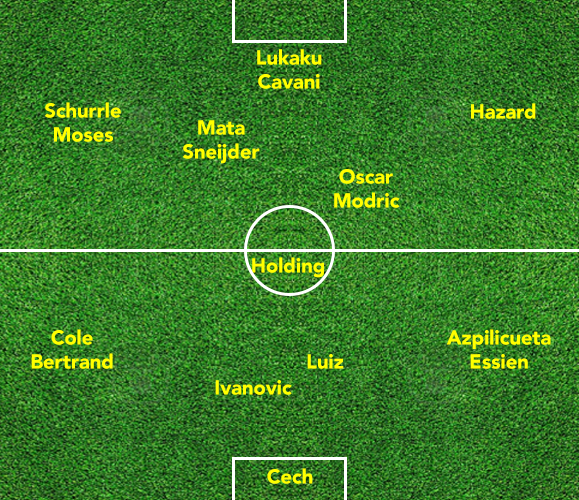 Cech in the net. Duh. Cole and Azpilicueta are great outside bookends, although it’s certainly time to start thinking about life after Ashley. If Leighton Baines can be pried away from Everton, that’s something to consider.

In the middle there are question marks. David Luiz is a rapidly improving defender with a talent for venturing forward, and it might make sense to cast him in a sort of modified stopper role – instead of thinking about the formation as a flat four-back structure, Mourinho might consider taking advantage of Sideshow’s natural attacking talents, so long as he’s paired with a reliable stay-at-home partner like Ivanovic (or Cahill or Terry, if he returns). Or not. Mourinho might decide he wants no part of a center back with wanderlust, and if so we might expect Luiz to be shipped out to Madrid and replaced by a more conventional option.

I hope that they can work together. Luiz is a rare talent and by the end of the season he was looking for all the world like Chelsea’s next captain. He has demonstrated a willingness to do what is asked of him and Mourinho is a tactical wizard. I can’t help thinking that if they can get on the same page the results will be epic.

NOTE: If I were Mourinho, I’d be looking to give JT a gold watch and usher him to the door. Terry is a threat to undermine any attempts to ease him away from his slot as alpha-back, and JM has plenty to worry about without having to deal with still more locker room drama. I’m guessing he got his fill of that in Madrid.

Here’s where things get really interesting. We know Mourinho prefers a five-mid shape with a world-class defender in the holding slot and fleet, wide playmakers on the wings. It isn’t at all clear that the sort of prototype holding player JM likes to deploy is currently on the roster. Essien is past his prime and at this stage is probably best utilized deputizing at right back (and available for emergency duty at holding). Mikel is good, but not great. Romeu is young and coming off an injury – he might be the right man in two years, but right now? Ake, also, looks like the future in this slot, but isn’t ready to dominate just yet.

In other words, don’t be surprised to see the club spending cash at this position in the transfer window.

On the wings, we saw a good example of what Mourinho dreams of in the Bayern Munich side that won the Champions League. Ribery and Robben are a deadly pair attacking wide off the flanks, and that commitment to true width on the wing stretches defenses in ways that Chelsea simply hasn’t been able to emulate over the past few years. The Three Amigos are talented and fun to watch, but Rafa was essentially playing three center mids, and only Hazard was especially adept at the sort of wide play Mourinho likes. Moses is the right sort of player, for sure, but last season we saw two different versions of him. He was an energetic, dangerous wide threat early in the season (although he was prone to disappearing at times and was far less effective in the slower possession game than he was on the flying counter-attack). The player who returned after the African Cup of Nations was mostly useless, though. He’s a valuable asset, but may be best suited as a change-up off the bench than as a first 11 stalwart.

It’s also worth noting that Chelsea remains hot on the heels of Bayer Leverkusen’s Andre Schurrle, although the deal seems to be in trouble. If it craters, maybe they bring Kevin De Bruyne into camp and see if he can fulfill the wide role. He’s looked good in the Bundesliga and with the Belgian national side.

In the center, word is that Mata is on the market. Rumor also has it that the Blues are sniffing around after Wesley Sneijder (a player I feel they should have pursued a couple of years ago). Rumors also suggest that Mourinho is interested in Luka Modric. Taken together, and assuming a certain credibility to the rumoring, we might not be surprised if Chelsea winds up deploying an offset triangle in the middle of the park, with a hypothetical Makelele/Essien-in-his-prime type holding behind a deep-lying playmaker (a traditional two-way mid who can handle the ball, pass and defend) and an advanced, true attacking center mid. Sneijder and/or Mata fit that last description, and Oscar was born for the other role. A Modric/Oscar platoon makes all the sense in the world for a club that could play 60 games next year.

Romelu Lukaku looked great last year at West Brom and has also impressed with the Belgian side. No question that he is the future up top, but he wants to play in the World Cup and that means he can’t afford to ride the pine for his club this season. If Mourinho can’t commit to him as the primary option at striker, he will surely force his way into another loan deal.

So, does Mourinho think Cool Hand Luke is ready? Nobody knows. And we continue to hear whispers that the Blues are talking with Napoli about Edinson Cavani (with Torres heading the other way, rejoining Rafa Benitez as a makeweight). Torres is ill-suited to the Mourinho style at this stage of his career, even though he showed dramatic improvement in the latter stages of the 2012-13 campaign.

All of which is to say that there are a lot of question marks in the attack. We saw little over the last three months of the season to suggest that Demba Ba is the answer, although he’s a wonderful second or third option, used properly. No idea what Mourinho thinks of him, though, so at this stage it’s all guesswork.

That’s how I see it, and if there are a lot of variables in the equation, that’s fine. None of us can read minds, none of us are privy to what’s going on in the club’s private deliberations, and it drives me crazy when analysts feel compelled to assert with grand confidence things that they simply cannot know.

One thing is for sure, though. It’s going to be an interesting and entertaining summer for transfer watchers. Also, perhaps a bit frustrating, as it’s almost certain that some of our favorites are going to be wearing different uniforms this fall….