Should your son join a fraternity? Read this. Right now.

Dear Parents: if your son goes to college, joins a fraternity and screws up, you could lose your home.

Do I have your attention yet?

How many times in my adult life have I heard this?

YOU were in a fraternity?

Doc Sammy, in another life.

Yes I was. Theta Chi, Gamma Omicron chapter, Wake Forest University. I know, I don’t fit the stereotype. Neither did my chapter. Sure, we had parties. We drank, sometimes more than was strictly healthy. We were appropriately hormonal for a pack of 18-22 year-old guys. We were noisy and obnoxious and occasionally rude, especially when singing a rousing round of “Roll Out Your Mother” during Parents Weekend football games.

But consider this. Theta Chi, during Spring Rush of 1980, was the first place in my life I ever heard anyone talk about diversity. Today, of course, diversity is a critical concept in corporations, in schools, in government, everywhere. We are becoming a more diverse nation that promotes equal rights and standing for people of all races, for women, and finally for the LGBT community.

I’ve been paid by large corporations to develop diversity training, in fact, and what a wonderful irony that my first introduction to the importance of the concept came in a fraternity.

Now, granted, there was only so much diversity that was possible at Wake at the dawn of the Reagan Revolution. It’s a small school, very conservative, lots of money. Very white at the time. Still, Theta Chi proudly recruited and built its culture around as much in the way of diversity as we could find. We had black brothers (more, in fact, than the smaller of the two all-black fraternities). We had Jewish brothers. We had Latino brothers. We had, although I’m not sure how consciously we thought about it at the time, gay brothers. Several, in fact.

This was just the demographic stuff. Our commitment to cultural diversity was off the charts. We had rich preppies. We had punks. We had jocks. We had musicians. We had guys cruising a steady course toward reliable careers in business and accounting. Some of us never touched drugs. Others were happy about it because it meant more for them. We had devout Christians and we had people who’d scare Jesus if they ever walked into a church.

There’s this wonderful picture in one of our scrapbooks somewhere of Hadley Heindel, the consummate prep, flanked by alpha punk Steve Dixon and Greg Adams, who was sort of a more over-the-top version of Bluto in Animal House. The caption: “The worst of both worlds.”

There was inter-racial dating and while we detested some of the other fraternities around campus for a variety of things, we were unforgiving of the institutional racism embedded in places like our next-door neighbors, the “Old South Fraternity.” It was hard for me to respect a woman who so much as walked into that goddamned place. And they were hardly the only ones – I’m not even certain they were the worst of the lot.

So if you’re expecting highly educated, intellectually evolved, enlightened Sam circa 2014 to be a little embarrassed because he was in a fraternity, I’m sorry to disappoint you. While we were hardly the world’s most noble and perfect group of people, there was much to be proud of there and I made friends whom I can trust and count on for the rest of my life. 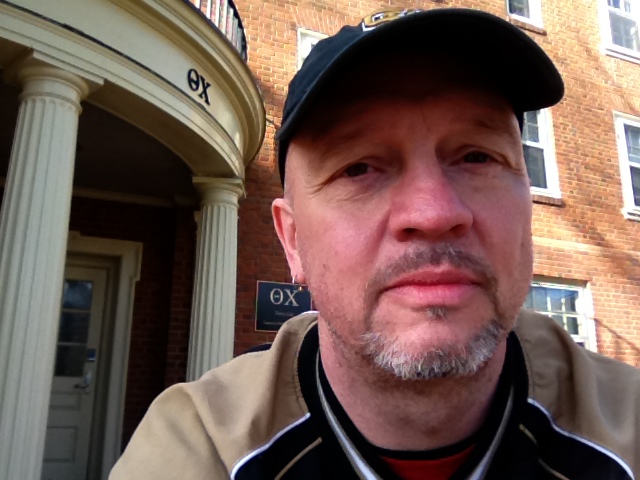 All that said, if I had a son headed for college today I would do all in my power – perhaps up to and including cutting him off financially – to keep him from joining a fraternity. It hurts me to say this, but if you’ll take a few minutes to read “The Dark Power of Fraternities, a recent feature in The Atlantic, I think it will become clear why.

The narrative is positively harrowing. Not because it’s chock full of Darwin Awards candidate stories – pledges being forced to drink until they die of alcohol poisoning, drunk brothers falling off roofs and maiming themselves, coeds accidentally rolling off the bunk and out open third-floor windows, physical hazing, sexual abuse, and the gods help me, booze enemas. I mean, it is full of these things, but from a certain perspective this is just where the, if you’ll forgive the term, Greek tragedy gets started.

And not because it’s yet another anti-frat hit piece. This is a fantastic bit of reporting. The writer, Caitlin Flanagan, does a deep dive into the institutional realities of American fraternities – not just the local animal houses, but the national organizations that charter and allegedly govern them, the universities where they exist, the histories of their inception and growth, and the powerful alumni who sometimes use their money and influence to enable behavior that would look appalling even from the perspective of Drunk Sammy, crawling out of a women’s dorm window at 3am, circa 1982.

She talks to everyone, including those who feel as strongly (if not moreso) about the positive potential of the fraternity experience as I do. Her findings go well beyond “fraternities are out of control” to explore why they’re out of control, and more critically, what it means for the brothers, the students (male and female) who attend their parties, their universities and even their parents.

For me, the biggest eye-opener had to do with the national organizations and how they have constructed their defense against legal liability. Most chapters see national as supporting them, as being on their side, as being an important resource they can call on, especially if the train jumps the tracks.

The truth turns out to be quite the opposite. In a time of crisis, depending on the details of what has happened, national will be Johnny on the Spot, yes, but not to save you. Instead, they’ll secure the perimeter and begin looking for a bus to throw you under.

Odds are very, very high that whatever has gone wrong violates your charter agreement, and in that case you’re on your own. They’ll circle the wagons, all right – to protect the organization and its coffers, but not you. The insurance premiums you’ve been contributing to? Forget about it.

Brace yourselves, moms and dads of undergraduate fraternity members:

“I’ve recovered millions and millions of dollars from homeowners’ policies,” a top fraternal plaintiff’s attorney told me. For that is how many of the claims against boys who violate the strict policies are paid: from their parents’ homeowners’ insurance. As for the exorbitant cost of providing the young man with a legal defense for the civil case (in which, of course, there are no public defenders), that is money he and his parents are going to have to scramble to come up with, perhaps transforming the family home into an ATM to do it. The financial consequences of fraternity membership can be devastating, and they devolve not on the 18-year-old “man” but on his planning-for-retirement parents.

I have a lot of friends with sons, some of them in college and a few more approaching that age. I don’t know what kinds of discussions they’ve had about fraternities, but I’m willing to bet that many of my ΘX brothers have fond memories of their undergraduate days around the house, and I’m certain that they learned some valuable lessons from their fraternity experiences, as did I. I consider myself to be a better person as a result of that experience, and I am certainly not alone.

But the world has changed, and Flanagan’s detailed examination of the current lay of the land is, or ought to be, sobering.