Tim Howard put on an epic display, but the last-minute heroics fell short in a 2-1 loss. 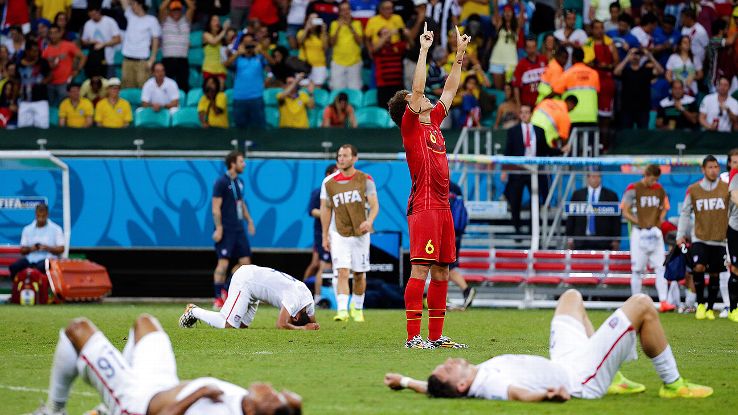 It was tense. It was gut-wrenching. And in the end, heartbreaking. The US team believed. Its fans believed. And now we have to find a way to feel pride when we thought we could go further.

12 thoughts, in no particular order.

It’s impossible to say whether today was the greatest performance by a goalkeeper in World Cup history. But we can say this, with confidence: it would be difficult for a goalkeeper to play much better.

2: MVP. Howard was unarguably the man of the tournament. And our best outfield player, equally uncontroversially, was Jermaine Jones. The measure of his influence was unexpected. We knew he’d be a fleet, bruising, tireless presence in defense, but he was for much of the tournament our most dangerous midfielder going forward, too.

3: Matt Besler, O-Ring. We’ve known that central defense was perhaps our biggest weakness. But when the gasket blew, you figured it would be Omar Gonzales, who’s good for one or two mental walkabouts per match, or perhaps Geoff Cameron, who’s wonderfully versatile, but not as lock-down as you might wish.

But today it was the reliable one, Matt Besler, whose ill-timed slip set up Belgium’s first goal, and who just flat got beat by Romelu Lukaku for what proved to be the winner.

The #USMNT has four years to turn central defense from weakness to strength, and the current top three might or might not be part of the equation come 2018.

4: Happy Trails. Howard is 35. Jones, Kyle Beckerman and DaMarcus Beasley are 32. All have likely played in their last World Cup. Clint Dempsey is 31, and there aren’t a lot of really productive 35 year-old forwards in the world.

All were notable strengths of this side. None are irreplaceable (even the remarkable Howard is deputized by Brad Guzan, who’d have started for most other teams in the Cup), but it’s never easy replacing their combination of experience and talent.

5: Run-DMB. When Beasley turned up at left back last year my initial reaction was … skeptical. I figured he was done years ago and all of a sudden he’s looking like or first option at a critical position?

Turns out DMB was at least as good as a 32 year-old LB as he was as a 22 year-old winger. Probably better. Despite being old and small, he was a relentless presence on the left side, defending like a rabid terrier and bombing up the wing to pressure the other side’s defense.

He became the first American to play in four World Cups this year. He’s been a credit to the program, and here’s wishing a class act all the best.

6: Bradley. Michael Bradley wasn’t getting playing time at Roma and wound up returning to MLS. Whether he thinks of this as a setback – it is – I don’t know. Whether he thinks he has anything to prove to the world, I can’t say. But if he does, this tournament proved no one wrong. He was active and committed, but not especially effective in the attack (although the pass to set up Julian Green’s goal today was masterful).

I’d have to look at a lot of tape to speak more authoritatively, but my sense is that this has a lot to do with how he’s deployed. He isn’t a true 10 – an advanced attacking midfielder. He seems more ideally suited to a deep-lying playmaker role, sort of an Andrea Pirlo who can also play defense. He has a knack for timing his runs forward out of that position, and it has always felt like the decision to push him higher up the pitch was driven by a sense that somebody had to be there, and he was the only guy who could hold his own in that role.

I don’t know – maybe I’m off base here. But he’s going to get one more bite at the Copa, and I think his chances for glory will be enhanced if he does whatever it takes to find a side in one of the top Euro leagues to polish his game and establish a niche that he can translate into the US system (which sadly, is too often about working around deficiencies).

7: The children are our future. While some guys are getting long in the tooth, the US also has a number of promising young players. DeAndre Yedlin was great coming off the bench and before getting hurt Fabian Johnson was one of the team’s best contributors. Yedlin, John Brooks, Tim Chandler, Aron Johansson, Mix Diskerud, Julian Green and Jozy Altidore are all 24 or younger. That’s a lot of talent that hasn’t yet hit its prime.

8: AJ. Aron Johansson came on in relief of the injured Altidore in the Portugal game, then was quickly rushed into witness protection. His development is a big key to the team’s future chances. Right now he’s scoring at will in Holland, which is great. Of course, a lot of guys can score in Holland, where defense is practiced rarely, and in moderation – it’s sort of the anti-Italy, really. Jozy Altidore terrorized the Eredivisie, too, before moving back to England where he terrorized no one. That may not be fair, given the rampant suck with which he was surrounded at Sunderland. But just for fun, let me offer another example just to goose my fellow Chelsea supporters: Mateja Kezman! He scored 105 goals in four years at PSV. That didn’t exactly translate into the Premier League, which actually fields real defenders.

That said, if AJ can move on to a better league and continue producing, he’d provide the #USMNT with a badly needed complement to Altidore up top.

9: About those roster moves. Jurgen Klinsmann took a lot of heat for leaving Landon Donovan at home, and much of the criticism lambasted him for including, instead of Captain America, a) DeAndre Yedlin, b) John Brooks, and c) Julian Green. Each made a notable contribution, though, so maybe Klinsy knew something we didn’t.

10: On the other hand… The guy I was most critical of was Chris Wondolowski. He is, I argued, what he is. A nice little MLS player and nothing more, a sort of Brian Ching for the Modern Age.

Anybody who watched the last few minutes today want to argue with me about that?

Manager Klinsmann has come in for a lot of criticism. He’s never been given credit for much in the way of tactical acumen and omitting Donovan sealed his fate in the eyes of many. Then there’s his perceived failure to attack, his personnel moves, and more.

I believe some of these points have merit, maybe, but ultimately he’s taking beatings he doesn’t deserve.

Bottom line: the US has never produced a true 10. We simply do not have the skill needed to possess in the attacking third, so we’re forced to develop tactics that are essentially workarounds. This means defend and counter, focus on the wings instead of the center of the park, and accept that you’re never going to win time of possession. Or, as noted above, we force a player like Bradley a bit higher than is ideal, and get less than stellar results.

This is not a coaching issue. This is a system issue. It will be solved when we begin producing playmakers who are comfortable in traffic at the edge of the box and not a day before, no matter who the manager is.

Also, that Altidore injury fucked everything. You lose your big striker. The adjustment moves Dempsey into a role that is nowhere near his best, and in the process weakens you in the areas he normally thrives in, too. Jozy goes down and it ripples throughout the side.

Again, the problem is depth, not the manager – it’s another system issue. Jesus, look at Belgium. The kid who started at striker today, that holy fucking terror of a 19 year-old, he’s their third stringer. Benteke, hurt. Lukaku, underachieving. Oh, let’s trot Skippy out there. The Yanks’ third option? Wondo or Johansson.

These are the fundamental, core issues that Klinsmann is dealing with. The US has a solid team, an improving program, but we are just not yet playing on a level field.

The argument that JK is not the right manager? Okay. Maybe. He isn’t a tactical genius, and he’s been criticized for that for years. It’s entirely possible that the smart move right now is for him to resign as coach and dedicate all his energies to being technical director. I would not argue with that. In fact, there’s no doubt in my mind that his importance to US Soccer lies more with building the infrastructure than it does managing the players we have now.

I just feel like he’s taking an unfair beating.

Let’s get to work…