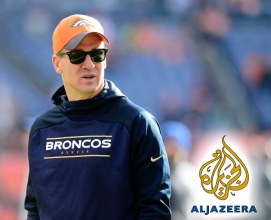 Al Jazeera should never have gone public with the Manning/HGH story. Its only responsible option now is to fire everyone associated with it and apologize.

A breaking report from Al Jazeera accuses Denver Broncos QB Peyton Manning (and others) of using the banned substance HGH.

FULL DISCLOSURE: a) I’m a Broncos fan, b) I usually find Al Jazeera to be one of the most reputable practitioners of journalism out there, and c) I have no idea whether the story is true or not. Manning has denied the report vehemently, but he also donated $20k to George Bush’s re-election campaign and pushes Papa John’s Pizza, so I’m unwilling to take his word as gospel.

The issue before us this morning isn’t Manning’s guilt or innocence, which will become clear enough in time. Instead, the question has to do with the most repellent case of shoddy journalism I have seen in a while. That this report saw the light of day is a blotch on Al Jazeera‘s credibility that it may never recover from.

Let’s look at the details. The emphasis throughout this passage is mine.

The documentary, posted online early Sunday morning and set to air on TV later in the day, reports that Manning was given a supply of human growth hormone in 2011 while he was recovering from surgery that year from a man identified by Al Jazeera as a pharmacist employed at the Guyer Institute in Indianapolis. The report cites a man named Charlie Sly, who allegedly spoke to an undercover reporter working for the network.

Sly told [ESPN’s Chris] Mortensen that he isn’t a pharmacist and wasn’t at the Guyer Institute in 2011, as Al Jazeera claimed. State licensing records indicate that a Charles David Sly was licensed as a pharmacy intern in Indiana from April 2010 to May 2013. His license expired May 1, 2013.

He said he recanted his story to Al Jazeera when he realized that they had used information he had “made up” to a man named Liam Collins who was trying to get into the supplementation business.

“When I was there, I had never seen the Mannings ever. They were not even living there at that time,” Sly said. “Someone who worked there said they had been there before. That was the extent of any knowledge I had. I feel badly. I never saw any files. This is just amazing that it reached this point.”

As my friend Andrew Magalee noted this morning, “When your only source for a story recants his story… you shouldn’t report it. Actually, you shouldn’t even be reporting on the basis of one source. That’s literally journalism 101.”

He’s right. That’s Journalism 101. It’s foundational, despite the fact that we now live in an era when “respectable” reporters and agencies routinely go public with reports that are both single-sourced and anonymous. If you wonder why such a high percentage of what we get from the media turns out to be utterly false in the end, this is your explanation. It’s why I tune out the instant I see the words “unidentified source” or “source who wished to remain anonymous.”

Manning may be guilty, or he may be innocent, but this story should never have been made public. If Al Jazeera hopes to retain even a shred of the credibility it has built in recent years, it has only one course of action available to it. It must pull the story, apologize, and fire every single employee who contributed to it. This means reporters, it means editors, and it means everyone up the line who had the authority to stop it and didn’t.

If they don’t, we can go ahead and file them in the same folder where we keep FOX and CNN.