Does Trump actually want the job?

If Donald Trump really is running for president, he’s doing it all wrong.

In new poll, support for Trump has plunged, giving Clinton a double-digit lead

Support for Donald Trump has plunged as he has alienated fellow Republicans and large majorities of voters overall in the course of a month of self-inflicted controversies, propelling Democrat Hillary Clinton to a double-digit lead nationally in a new Washington Post-ABC News poll.

For pure political theater, there simply hasn’t been anything like this in my lifetime.

Appreciate the congrats for being right on radical Islamic terrorism, I don’t want congrats, I want toughness & vigilance. We must be smart! 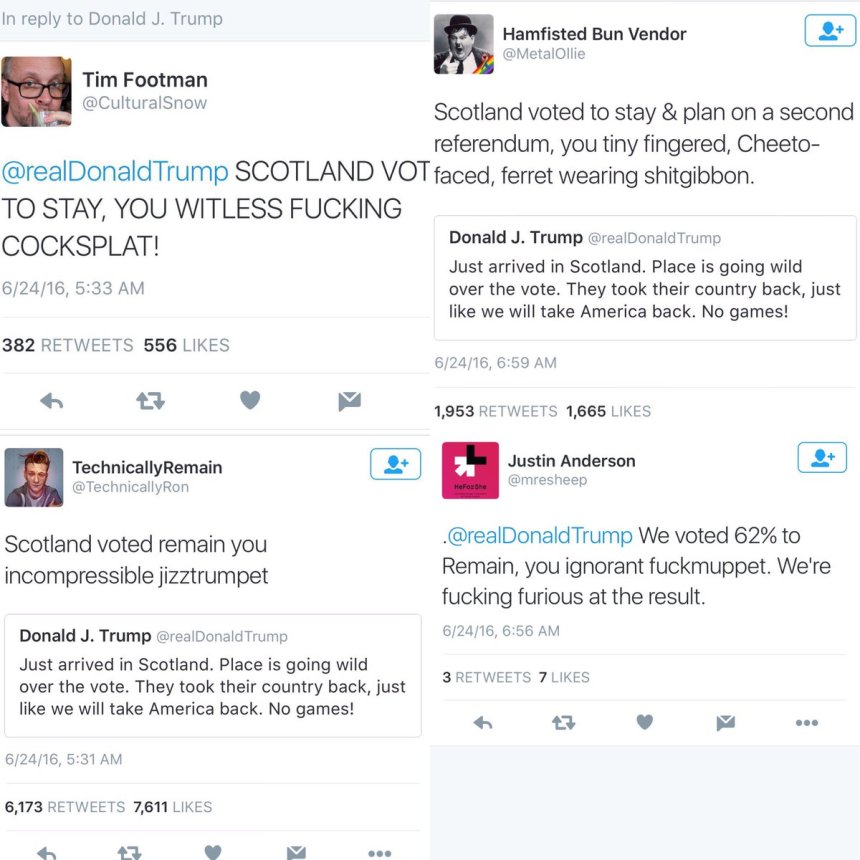 At least he fired his campaign manager because, you know, it’s somebody else’s fault he’s a tumescent bumcork.

Donald Trump isn’t just occasionally shooting himself in the dick (which he assures us is yuuuuge). He’s emptying the magazine. Every day.

All fun and games aside, though – I mean, this is the future of the western world we’re sporting with – what in the hell is going on with Trump? It’s like he’s actively trying to lose.

This, of course, has been speculated at by any number of people, including me. Some folks think we’re seeing the Full Manchurian, a line of thinking which says Trump is secretly trying to elect his old friend Hillary by destroying the GOP from within.

The other fork in this particular road says Trump wants everyone talking about him and paying attention to him 24/7 because he’s, you know, an archetypal narcissist, but he doesn’t really want the job. This theory was lent some credence, at least, by a recent story from a former staffer who says what Drumpf really wanted was to finish second.

I can’t begin to assess the credibility of her testimonial, but I certainly can’t dismiss it out of hand, either.

A big part of the motivation toward conspiracy theories is driven by a simple observation: nobody who is actually trying to win could possibly be fucking up this badly. Trump has soaked the Republican Party in discarded kitchen grease, stuffed it in a dumpster, lit it on fire, and strapped it to the back of a train which is now Pelham 123ing toward the heart of Believeland. (Trust me, folks – God still hates Cleveland.)

If Trump were actively trying to destroy the GOP, what could he possibly do that he hasn’t done already without giving the game away?

As I see it, there are at least three possible explanations for the self-defeating behavior of Candidate Trump.

1: He really is just that inept. (Incompetence Theory)

2: He wanted the publicity, but not the job. (Narcissism Theory)

3: He wants to elect Clinton and damage the Republican Party. (Manchurian Theory)

#1 is certainly possible. Trump has led a very public life and at no point has he done much to suggest that he’s a rocket surgeon. He’s an entitled brat who inherited his wealth from Daddy, and some financial analysts have demonstrated that he’d actually have more money today (assuming even that he has as much as he says he does) if he’d just forgotten about business and invested it all in index funds. He’s declared bankruptcy four times, which is hardly indicative of a deep wellspring of financial genius, and beyond all that I think you simply have to watch the guy and listen to him. The smarter you are, the dumber he sounds – every time he opens his mouth.

If he has you convinced that he’s a bright man, that tells me more about you than it does him.

#2 is way plausible. Trump loves talking and he insists on an unseemly amount of fluffing from those around him. The first that happens in new hire onboarding with any Trump venture is the dispensing of knee pads and Chapstick. So perhaps the former staffer noted above is right. He wanted the attention, but he’s at least bright enough to know that the last thing in hell he wants is the actual job. In other words, he’s the dog that’s been chasing the car all summer. One day he actually catches it and has no fucking idea what to do.

#3 seems far-fetched under any circumstances. It requires me to believe he’s smarter than we know he is, and more importantly, it requires us to buy that this conspiracy has been in the works since he was in grade school, because Trump 2016 is nothing more than the political version of Trump models 1946-2015.

In the interest of being thorough, I should point out that there is another possibility.

We have explored this line of thinking a few times in recent years. We first laid out the case four years ago as the only possible explanation for his bizarre behavior in support of Mitt Romney. We elaborated a few months later, when “Trump’s” shenanigans provided still more support for the theory.

Note: It must be acknowledged here that Trump’s 2012 antics may have been merely a dry run for his plan to destroy the GOP.

In the end, we may never know. Two things are for certain, though. First, if Trump is legitimately gunning for the White House, he couldn’t be doing it more wrong if he were trying. And second, if you’re not especially invested in whether or not Rome actually burns, it’s all damned fun to watch.