Does Trump actually want the job?

If Donald Trump really is running for president, he’s doing it all wrong. 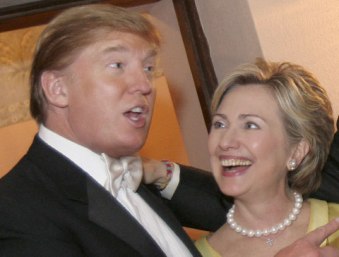 In new poll, support for Trump has plunged, giving Clinton a double-digit lead

Support for Donald Trump has plunged as he has alienated fellow Republicans and large majorities of voters overall in the course of a month of self-inflicted controversies, propelling Democrat Hillary Clinton to a double-digit lead nationally in a new Washington Post-ABC News poll.

For pure political theater, there simply hasn’t been anything like this in my lifetime. END_OF_DOCUMENT_TOKEN_TO_BE_REPLACED

BREAKING: Donald Trump is a hoax

Recently I was pondering Donald Trump’s inexplicable behavior on the campaign trail, allegedly on behalf of GOP nominee Mitt Romney. I was only able to conceive of two possible explanations that would account for his ludicrous Orly Taitz act: either he is secretly working for Obama or he’s actually a covert performance artist working on a long, episodic political satire of some sort.

Then it hit me.

I’m still in the process of nailing down all the details, a process made difficult because the trail is so well-covered, but the inescapable conclusion is this: the man we think is Donald Trump isn’t. The real Trump, the man born in 1946 to Fred and Mary Anne Trump in Scotland, the man who attended Wharton and established a lucrative career as a real estate developer, is lying on a beach somewhere soaking up the sunshine and living the good life.

Available evidence suggests that in the early 1980s Trump was approached by a wealthy, famous man who wanted to buy his identity. END_OF_DOCUMENT_TOKEN_TO_BE_REPLACED