It's official: Tom Brady just isn't that good a quarterback

No, Pats fans, Tom Terrific doesn’t belong in the Hall of Fame. Not unless he’s sweeping up.

For years we Denver Broncos fans, who feel like former superstar running back Terrell Davis belongs in the NFL Hall of Fame, have heard a variety of arguments against his candidacy. One that has always struck me goes like this.

Yes, Davis gained a lot of yards and was key to Denver’s two Super Bowl wins. BUT, after he retired the team generated the same kinds of results with a variety of nobody backs. In the several years post-TD the team was led in rushing by the likes of Olandis Gary, Mike Anderson and Rueben Droughns, who posted four 1,000 yard season between them. Add to this two 1,500-yard campaigns (these were two of his three best years) by Clinton Portis, and, the argument goes, yo momma could have gone for 1,000 in that system.

That’s the key word: system. It wasn’t Davis, it was Mike Shanahan’s system.

Which brings us to Tom Brady, who’s near the end of a four-game vacation incurred for cheating in the playoffs a couple years back. We already had some suspicion that Brady might be the beneficiary of a system, of course. In 2008 he sustained a season-ending injury and his replacement, Matt Cassel, stepped in, threw for nearly 3,700 yards and an 11-5 record. Cassel has spent most of the remainder of his NFL career in witness protection.

Now, in Brady’s absence this year, we have seen Jimmy Garoppolo look utterly world-class in his two starts. Then he got hurt and the team turns to somebody named “Jacoby Brissett,” who evidently had a couple decent seasons at NCAA powerhouse NC State, and he led the Patriots to a 27-0 thrashing of Houston (which has a pretty highly regarded defense).

The main question is whether we should induct Garoppolo and Brissett into the Hall of Fame right now or wait until the bye week. 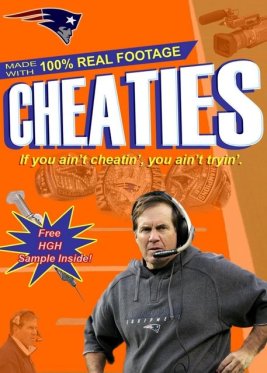 If it wasn’t before, it ought to be painfully evident now: Tom Brady is nothing special. The genius there is Bill Belichick, who can evidently pull a bus driver out of the stands and win with him at QB. Yes, Belicheat is as corrupt as the night is long and it’s only a matter of time before the Feds open a RICO investigation of the Kraft Crime Family. But just because you have to be watched like a cornered rat doesn’t mean you aren’t good at what you do, and there is no argument that Belichick is among the smartest coaches in history.

All these years we’ve endured Pats fans (who didn’t realize they had a football team before 2001) making a fuss about how Brady is greatest quarterback evah. In truth, there’s a reason he wasn’t drafted before the sixth round. Had he wound up with, say, the Jets, he’d probably have had a nice little run as a career backup.

In other words, he’d be Brian Hoyer.

So simmer down, Pats fans. Tom Brady is nothing more than a pretty good system QB. If not for Bill Belichick, the only way he gets into the Hall of Fame is if he buys a ticket.