For COVID-19, America is Home

As any number of Facebook posts and memes have pointed out in recent weeks, we don’t wear masks to protect ourselves, we wear them to protect others. Our homemade cloth masks don’t do a great job of keeping the virus out, but they’re fairly effective at keeping it in.

In other words, minimizing the spread of Coronavirus depends on concern for others.

But America was founded on the idea that somehow individualism adds up to utopia for everyone. The best society happens when I get mine. The root of this ideology is economic, but it has, over several centuries, become generalized to all spheres of life. We have recently seen the results in pictures from malls, restaurants, and, remarkably, state capitols.

We have apparently reached the point in our social evolution where I have the freedom to kill you. If the government does anything to prevent me from killing you, that’s communism.

Individualism is no longer an ideology of freedom (if it ever really was). It’s an existential pathology. 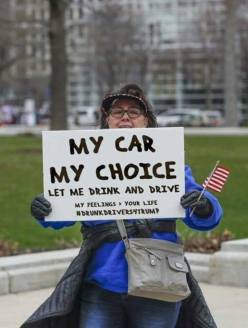 I’ve written before about the French statesman Alexis de Toqueville, whose tour of the US in the early 19th century gave us Democracy in America, still regarded by many as the most insightful look at our national character ever written. For me, the center of his thesis rested on the phrase “self-interest rightly understood.”

Their socially and civically viable vision of self-interest was working well in 1835, when Alexis d’Toqueville wrote “How the Americans Combat Individualism by the Principle of Interest Rightly Understood.” The idea and word “individualism” were newly minted and Tocqueville marveled that “an enlightened regard for themselves constantly prompts [Americans] to assist each other, and…willingly to sacrifice…[for] the welfare of the state.”

This variety of self-interest knows it needs a thriving community and doesn’t seek to gain at the expense of it. Weakening what you depend on, slowly weakens your more enlightened self-interest (it’s a win-now-lose-later strategy). Similar logic animates Pericles’ funeral oration: “It does not matter whether a man prospers as an individual: If his country is destroyed, he is lost along with it.” Even Ayn Rand, the high priestess of selfishness, distinguished between what she called rational and irrational forms.

What would de Tocqueville have made of the display in Lansing a couple of weeks ago?

Granted, much has changed. The America of 1831 (when he arrived) was comparatively homogenous – which is another way of saying the slaves hadn’t been freed and, as such, the particular forms of racism that have driven both social evolution and public policy since Gettysburg (and especially since the Civil Rights Act) didn’t yet exist. People are more likely to take care of theirs, and it’s always a mistake to romanticize their concern for yours.

In short, America c.2020 is perhaps the ideal host for Coronavirus. Its ability to spread is dramatically hindered where the population actively works to protect others. A society that has fetishized and institutionalized feral-dog-Darwinism, on the other hand, is the best incubator imaginable.

COVID-19 wasn’t born in America, but rest assured, America is its home.