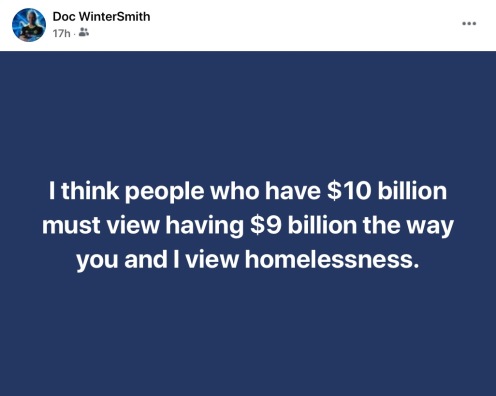 Got some interesting comments, but came away feeling like I needed to elaborate a bit.

Chris Rock explained to us the difference between rich and wealthy. Shaq is rich. The rich white man who signs Shaq’s check is wealthy.

That’s what I’m thinking about – the wealthy, not the rich. Because you can become a millionaire a lot of ways, including by being smart and working hard. Yeah, it helps if you aren’t born into poverty, but you can be a wonderfully moral millionaire. I’m lucky to know a few myself. I sometimes wish I were one.

But there’s a point where it’s not clear a person with a soul can pass. It’s like a glass ceiling, except maybe it’s made of some kind of humanity-sucking ur-obsidian. I’ll never forget Michael Milken in the ‘80s – a hypermillionaire cheating little old ladies out of their social security checks. Pure pathology.

Fitzgerald and Hemingway used to have an argument. Hemingway believed the “very rich” were more or less regular people with a lot of money. Fitzgerald disagreed. “Let me tell you about the very rich,” he said.

They are different from you and me. They possess and enjoy early, and it does something to them, makes them soft where we are hard, and cynical where we are trustful, in a way that, unless you were born rich, it is very difficult to understand. They think, deep in their hearts, that they are better than we are because we had to discover the compensations and refuges of life for ourselves. Even when they enter deep into our world or sink below us, they still think that they are better than we are. They are different.”

William Gibson took it a step further: first with the Tessier-Ashpools in Neuromancer and then with Virek in Count Zero, his argument was that they weren’t really human at all anymore (or that they won’t be in the relatively near future).

I look around the world today and wonder just how human our billionaire overlords really are.

Maybe this is why the idea of lizard people doesn’t scare me.

The Ties That (No Longer) Bind

A few months ago I wrote that “I don’t want to “heal America’s divisions.” I’m reflecting on that sentiment this morning, the day before what may be the most important election of our lifetimes.

Many of us have some version of the braying racist, fascist, misogynist drunkle archetype in our lives. A Karen, a Chad, a Becky. Maybe it’s a relative we have to contend with at holiday dinners. Maybe there are family obligations, so we grit our teeth, bite our tongues, and tell our children (before and after) to ignore the ravings of the yahoo at the other end of the table. For others it may be a long-time friend who drifted in the wrong direction through the years. Or maybe the friend never changed, but we drifted in the right direction. END_OF_DOCUMENT_TOKEN_TO_BE_REPLACED

Several conversations since I originally posted the spectrum have made clear that some elaboration and refinement is in order. In this update I add elements for context and present a revised spectrum graph that more accurately reflects the US political-economic spectrum with respect to the global “left-right” divide.

There exists a sort of consensus among Americans about left-wing vs right-wing (vs “moderate” or “centrist), but this narrow popular view fails to account for historical shifts and the global context. In short:

The US is significantly more conservative than the rest of the industrialized West and we have shifted dramatically to the right over the past 50 years. END_OF_DOCUMENT_TOKEN_TO_BE_REPLACED

If We Shouldn’t Judge the Founders by Our Values, Should We Live by Theirs?

Philadelphia Union honors those killed by police.Our recent protests, sparked mainly by the Minneapolis PD’s nonchalant murder of George Floyd – with the cameras rolling, even – are roiling American society. Institutions are challenged. Assumptions are ravaged. The whole of the American metanarrative is seemingly up for review. END_OF_DOCUMENT_TOKEN_TO_BE_REPLACED