I came home this evening after running a couple of errands to find a half-dozen people at my door. Two or three were uniformed.

Two followed me around back as I parked. Since my girlfriend (let’s call her J) has never so much as jaywalked I figured they had to be after me. No idea why, but the adrenaline was starting to pump.

I’m not going to talk to cops but I can hear what they have to say. It turns out they were looking for a woman named Amanda, whom they had seen coming in and out of my apartment routinely over the past three weeks. END_OF_DOCUMENT_TOKEN_TO_BE_REPLACED

Was I Wrong About the Denver Police Department?

In 1998 I was semi-involved in something really unsettling, and I’m now wondering if I just badly misinterpreted what happened.

The story begins in graf 4. Here’s where it gets interesting: END_OF_DOCUMENT_TOKEN_TO_BE_REPLACED

NFL Commissioner Roger Goodell sat down with Emmanuel Acho for one of his Uncomfortable Conversations with a Black Man. Acho asked Goodell what he would say to Colin Kaepernick by way of apology.

At which point … well, Commish gonna do what Commish do. Deflect. Dissemble. Misdirect. Distract.

This morning Mike Florio took Goodell apart like a hungover Gordon Ramsey breaking down a chicken with weak joints.

And I honestly don’t have a thing to add. I’m just linking it for the record.

All I’ll do is repeat the question I asked back in June: Mr. Commissioner, what team will Kaepernick be playing for this fall?

What conclusions would I draw about you if I didn’t know you?

Ye shall know them by their fruits. Do men gather grapes of thorns, or figs of thistles? – Matthew 7:16

Let’s say I don’t know you personally. All I have are your social media feeds.

I start on Facebook and read everything you’ve posted since early May, along with your interactions in the comment threads. END_OF_DOCUMENT_TOKEN_TO_BE_REPLACED

Why Am I So Cynical About Mississippi? Consider Georgia.

Recently the Rev. Dickie and I devoted a little time to clowning Mississippi and its decision to remove the Confederate battle jack from its flag. It has since been suggested to me, privately, that I shouldn’t hassle people who are doing the right thing.

But there are reasons to reserve judgment. Consider Mississippi’s friend and neighbor, Georgia. END_OF_DOCUMENT_TOKEN_TO_BE_REPLACED

Let’s have a look at the current residents of South Dakota’s most famous mountain.

The first was a rich white guy who owned more than 100 slaves, and wasn’t known as the best master, at that.

The second guy – also wealthy – owned more than 700 slaves during his life.

The third guy didn’t own slaves, but had this to say about those of African descent: END_OF_DOCUMENT_TOKEN_TO_BE_REPLACED

All of a sudden protesting racism by promising to kneel during the national anthem is a thing in the NFL. END_OF_DOCUMENT_TOKEN_TO_BE_REPLACED

George Floyd and the Soul of The Mission

I’m a big fan of Dan Ryan’s. He sees the streets and he loves the people he finds there. And in him they obviously recognize something they can trust.

As a result he’s able to capture a frankness, an honesty, a whimsy that I think the rest of us miss entirely. Maybe we can’t see it, or maybe we’re afraid to.

Dan recently took his camera to the George Floyd Matters rally in San Francisco’s Mission District and came away with a visual record of a tough community that has seen plenty, and has now seen enough. But not so much they’ll forsake their values.

Give it a look.

What About the Monuments to America’s OTHER Slaveowners?

It’s been a bad few days to be a statue of a figure associated with colonialism, slavery, or racism.

In London, witnesses say a statue of slave trader Edward Colston tripped and fell into the river, while one of “noted slaveholder Robert Milligan has been removed from outside the Museum of London Docklands.” Mayor Sadiq Khan has launched a review of “all of London’s statues and street names,” decreeing that those with links to slavery “should be taken down.” Formula 1 champion Lewis Hamilton, clearly agitated that the UK would honor slavers, said “All statues of racist men who made money from selling a human being should be torn down! Which one is next? I challenge government officials worldwide to make these changes and implement the peaceful removal of these racist symbols.” END_OF_DOCUMENT_TOKEN_TO_BE_REPLACED

Q: Who this week referred to “the obvious racial discrimination that we’ve seen on full display on our television screens over the last two weeks”?

This is a Huge Moment in History. Here’s Why I’m Still Cynical.

The NFL is talking the talk. Now for the walk…

What a week this has been. I’m wondering if, when historians look back, they’ll regard this as being the most significant moment of the era in which we have lived.

But I’ve greeted it with a degree of cynicism, sarcasm, and snark. END_OF_DOCUMENT_TOKEN_TO_BE_REPLACED

One last question, sir – who will Colin Kaepernick be playing for this season?

Brees doesn’t get it. And Malcolm Jenkins is a hero.

First Drew Brees makes clear he has no idea what he’s talking about by pretending Colin Kaepernick’s protest had something to do with “the flag.”

Then people landed on him – hard – most notably his teammate Malcolm Jenkins.

END_OF_DOCUMENT_TOKEN_TO_BE_REPLACED

Here’s Why These Protests Are Different 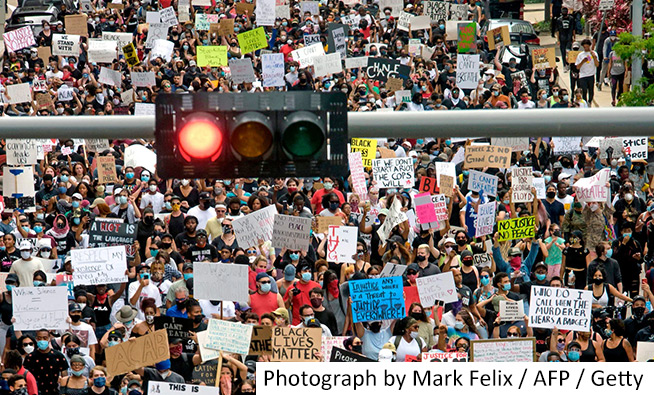 I’ve heard people the past few days saying these protests feel different to them. Like, maybe this time we’ll get results? Like George Floyd’s murder was the straw that broke the camel’s back? Like this is the tipping point and justice will no longer be denied?

I’m long past betting that protesters can stay in for the long haul. America is a soft culture, pampered and affluent, with no history whatsoever of sacrifice. (Talking about the white folks here – Black America gets it, but real change is going to require allies willing to go the distance with them.) Bread? Circuses? We’re good. Traditionally we’ll raise hell a few days then give up. We treat civil disobedience like we might a music festival. Coachella. Bonnaroo. Cops-Murdered-a-Black-Guy-Palooza.

Nor is there any hope at all the establishment will change its mind in the absence of dire coercion.

But the protests outlasted the weekend and it’s absolutely not business as usual. So yes: maybe this time is different. Probably not, but maybe. If it is, here’s the why.

Cops killing black people for no reason isn’t new. Protests against such killing isn’t new. The rage keeps growing, but why would this case be the one? The video of Derek Chauvin calmly murdering George Floyd is certainly harrowing, and no doubt that’s a part of it (just like the Ray Rice video put the NFL in a spot where it could no longer hem and haw its way around its domestic violence problem). We saw what we saw.

I think the bigger reason is Coronavirus.

This is what I think is happening on the people’s side. Some of the same kinds of dynamics may well be at work with the police – it’s a stressful time for everyone, one way or another. If so, what we have in the streets is a keg of dynamite with a gasoline-soaked fuse.

If, on top of it all, we start seeing record high temperatures (and a nasty COVID second wave)… Well, may the gods help us all.