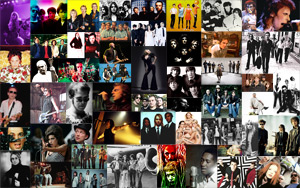 So our next highest scorer, and the official winner, is … Seth Michalak of sun-drenched Savannah, GA. Seth correctly identified 39 of the artists, and will be receiving a copy of Lee Camp’s latest DVD, Live at Comix, as soon as he gets me his mailing address. Congrats, Seth. Glad you won something, because Terrell Owens is going to rip the guts out of your beloved Bills this season.

A special honorable mention is due to Giuseppe, by the way – he’s Italian, which puts him at something of a disadvantage since pretty much none of these acts hails from Southern Europe.

Obviously some of these were easy and others were pretty tough. I was amazed at how many of you pegged Jeffrey Dean Foster, though, considering his general lack of deserved popular acclaim. Those who know me couldn’t help getting Foster, but even those who don’t know me correctly identified his soulful countenance. I was equally surprised that so few of you got Damon Albarn (the guy in the top hat that a couple of you thought was Bing Crosby). He’s one of our absolute greatest talents alive and I’d have expected more people to recognize him.

In any case, this was fun. Let’s do it again sometime.