Rural elites: I've had it with the arrogance of ignorance (and its promoters)

The only thing worse than the willfully ignorant is the legion of apologists enabling them.

Since the election – before, really – we’ve heard a lot of talk about how all those urban liberal elites need to stop being so arrogant and start listening to very real concerns of real Americans in rural flyover values America.

We have more recently begun to see some informed pushback against this self-serving rhetorical engineering masquerading as good-faith socio-political analysis. Now we’ve hit the daily double, though.

First, our friend Otherwise passed along a righteous rant from a very frustrated Melinda Byerley, CMO of TimeShare. Have a quick look. 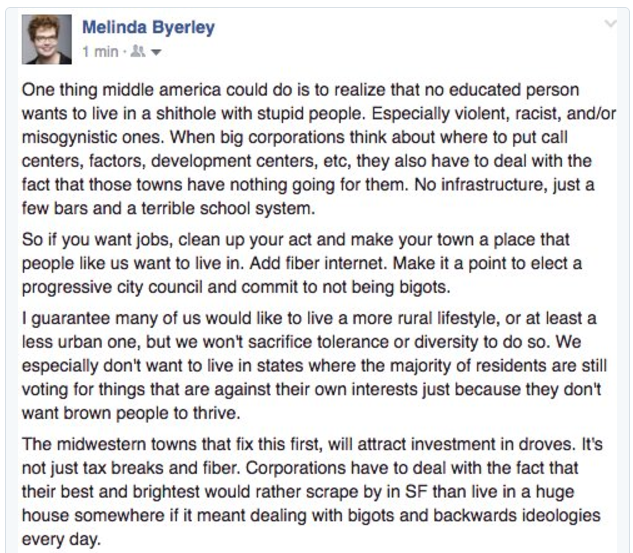 Then, this morning, the always-righteous Rude Pundit uncorked on “rural elitists.” He was responding to an op-ed in the NYT by a Knoxville, IA news director. You should read the whole post, but here are some of the salient points:

There are a whole bunch of us city liberals who came from rural or southern or whatever areas. I’ve told this story a hundred goddamn times, but this pinheaded, Ivory Tower-humping leftist lived in a trailer park in Florida with a trucker father and a working mom. At 13, I started working unloading semis at warehouses after school. My family was on welfare, including food stamps, and when my father died, we were on Social Security to survive in the south, and we worked our asses off to get out of that hole. I know a shit-ton of other people who have a similar M.O. and now live in New York or L.A.  and a shit-ton who continue to live in rural areas. So don’t fucking preach to me about the goodness and grace of conservative rural people or the white working class.

Trust me, he’s barely getting up a head of steam at this point.

Byerley could have been a bit more diplomatic, but there’s no question that she’s right. About a lot. As Otherwise noted in a brief comment to the indignant author of the Inc article linked above:

…what Ms. Byerley said is absolutely true, in both perception and fact. I am a former executive and now live on a 140-acre farm near Bloomington, IN, which I will soon sell to move to somewhere like Taos, Honolulu or Santa Barbara, for the very reasons Ms. Byerley called out. I’m tired of living with these people.

Over my career I’ve tried repeatedly to hire talent to move to the Midwest and South and failed repeatedly, all because of the “shithole” factor. There’s a reason these small Midwestern and Southern towns are full of old people—it’s because the young and talented have fled to more tolerant and interesting “blue islands.”

Otherwise couldn’t be more on point. I haven’t had to hire jobs to Red America, but I have had to consider where I might be willing to move for my career. My thinking mirrors his – and that of millions of other workers – precisely. Ain’t going anywhere in the South, period. You could get me to Chicago and Minneapolis in the Midwest. Been to Boston and would go back. For the right situation you could get me to any number of big cities in the Mid-Atlantic and Northeast regions. I might go back to Seattle. I’d go to Portland. And if all goes the way I want I’ll stay in Denver the rest of my days.

But unless somebody puts about ten times as much money on the table as anyone would be likely to, that’s it. And maybe not even then.

As my colleague Brian Angliss recently noted, urban types aren’t the only ones who live in bubbles. Except he was being charitable about it, as is his wont. Another S&R colleague, Gavin Chait, also tackled the subject in his outstanding wealth inequality series last month:

And if cities are filling up with diverse, educated, young and ambitious people, who is left in small rural towns?

There is now a cultural cliff between those living in cities and those living in the towns clustered nearby. Cities – with their high rents and limited space – have even experienced a resurgence of manufacturing. It turns out that it is far easier to start a complex manufacturing business (and all modern factories require a mix of automation, engineering, design and raw labour) in a city where everyone is close by than in a rural area where highly-skilled people may not wish to live.

The truth of the matter is that America’s cities are overrun by people who used to live in rural America and as a result know exactly what it’s all about. On the other hand, while there are some who left the city for the country, that number is far smaller. This, ladies and gents, is a math question. Can you count or can’t you?

In other words, the idea that rural folks are real Americans and city folks live in a bubble is, statistically speaking, outrageous bullshit.

I recently had an extremely unpleasant conversation with someone who seemed hellbent on illustrating my point. Let’s call him Robert. I have known Robert for a very long time and we are, for better or worse, bound by what we’ll call close family ties.

At various points in the exchange Robert, who resides in the town where I grew up, threw every cynical FOX News and Rush Limbaugh-endorsed talking point he could think of at me. He’s a proud Trump voter and allows that the economy is already upticking as a result of the coming administration. Over the course of an hour he asserted at least ten “facts” that “proved” his opinions correct. Problem was, all of these facts were, well, factually wrong. Demonstrably wrong. Fake news.

Not opinions. Not points of view. Not perspectives. Just flat-out made-up misinformation manufactured by various industrial lie machines in service to the GOP and spread across their listeners like so much…fertilizer.

I corrected each one with actual evidence. He responded by pretending I hadn’t said a word, instead lobbing out the next lie. It got tired.

All of this is merely context, though. There were two parts of the conversation that really stand out in the way they address the question of point of view and perspective – you know, the one we keep being told we need to understand and respect.

The first happened when, out of nowhere, he asked about my religious beliefs. I said I had no idea how it was relevant, but he knows I’m an atheist. Next thing I know I’m being subjected to an escalating barrage of abuse – no other word for it. If I didn’t believe in the Lord, I was an idiot, and I needed to go read the Bible. (This is actually a tame characterization of what was said.)

The thing is, I was amazed to learn about Robert’s deeply held religious beliefs, as would be anyone who knows him (and I have known him literally his entire life). He’s never been Christian in any way that would be noticeable. If he’s ever been in a church it’s news to me. And he’s telling me to go read the Bible when I’d bet the farm he doesn’t have one.

I, of course, grew up Southern Baptist and was a Christian until about 30. I still have my Bible from my youth and I have read it. My doctoral dissertation drew heavily on my experience with the Old Testament and could have probably been submitted for a PhD in Theology.

After this, he attacked my education. He says I’m smart and have all this formal learning, but – you know what’s coming, right? – he has “street smarts.” As it turns out, I had all my ed opportunities paid for and handed to me, while he had to fight tooth and claw for everything he ever had.

This is a damning criticism, except the exact opposite is closer to the truth. My family didn’t have much money, so nobody put me through school. I earned scholarships and assistantships at each step of the way. I taught classes at the grad level to help pay the way. I worked third-shift while an undergrad and DJed on the side at the MA level, where I routinely found myself with barely enough money in my pocket to buy a McDonald’s burger for dinner. At the doc level I took out loans, which I’ll probably never get paid off.

Robert, on the other hand, didn’t scrap for anything. You know that elite, rich, 99% white suburb just outside every major city in the US? That’s where he grew up. Massive house. Massive yard. Dad had plenty of money. Best educational system in the entire region. Robert wanted for nothing.

His current situation, though, finds him scrapping and fighting an uphill battle every day, but it’s because he couldn’t be bothered to take advantage of all he had given to him.

Robert would undoubtedly regard himself as “real America,” and he doesn’t miss a chance to make clear that “street smarts” are better than liberal book learning. Meanwhile, he’s one of these racists who doesn’t realize he’s racist. He has, on any number of occasions, railed about the evils of “foreigners.” He looks forward to Trump dealing with all those Muslims and says he’d shoot any Muslim who fucked with his wife and daughter. (He isn’t married and hasn’t seen his daughter in quite some time. Also, he has never met a Muslim that I’m aware of.)

Robert thinks I’m out of touch with the hard working life, even though I grew up working class while he grew up privileged. Robert imagines himself a man of faith even though he knows nothing of Christianity and has an out-of-wedlock child he never sees.

This is what Rude Pundit is getting at in his post on “rural elites,” and I imagine a lot of other big city urban liberals are, like me, sick to death at being told by people who have no fucking idea what they’re talking about that we don’t understand things that we have deep first-hand, lived experience of. We don’t know everything, and we know we don’t. But I think we do understand this: while arrogance comes in many forms, nothing is quite as grating as the self-satisfied arrogance of the supremely, willfully ignorant.

Except, perhaps, the arrogance of the clucking conservative faux-intelligentsia concern trolls acting as apologists and enablers for the worst traits of the collective American character.