The cyberpunk theme of autonomous technology implies the death of utilitarianism. If autonomy over technology has in fact been lost, then “technology is neutral” is no longer an ideology – it’s a prayer.

As my birthday approached, I got to thinking. It’s probably common enough, once you reach a certain age, to reflect on all that has happened in the world during your lifetime. Something made me ask the next question: what about the 61 years before that? Take my birthday as the center-point, and compare the span before with what’s come after.

In 1899, William McKinley was president. Joe Biden would be born 21 years later. My great-grandfather Charlie was eight.

A majority of Americans lived in rural areas. 44,628 days later, there are very real questions about whether the damage we’ve done to the environment is fixable.

Indoor plumbing, telephones, and cars were rare. Only the well-off could afford an automobile, for instance, and the manufacturer options included a variety of household names:

Ford wouldn’t be incorporated until 1903.

Top tech innovations in the last decade of the 1800s included the escalator, the zipper, the Cinematographe, and the motor-driven vacuum cleaner. The zeppelin and the air conditioner were right around the corner. The first successful radio transmission happened in 1901. Now we engineer genomes and know a staggering amount about the first seconds after the Big Bang. Don’t get me started on quantum mechanics.

The Wright Brothers also weren’t due up until 1903. Last week, a Chinese spaceship crashed into the dark side of the moon.

I was lead writer on a “future of cybersecurity” guide recently published by my company. In it, I talk about artificial intelligence, quantum computing and cryptography, deepfakes, a trillion-IoT device world, hackable pacemakers and insulin pumps, flying taxis, autonomous killbots, an “i-condom,” and lots more fun stuff to keep you up at night. Some of it is very near-future (as in, less than a decade). Some of it is already happening.

Why is this important?

Heck if I know. It probably isn’t. We all know things have changed, are changing, and will keep changing. We know the pace is vertigo-inducing, we know the scale is epochal, and we may feel it’s all we can do to hang on.

And we all have our own frames for thinking about it. For managing it.

This is mine, and it’s been a fascinating exercise in personal perspective.

Our dalliance with artificial intelligence hit a major milestone last week. OpenAI, a research organization “with the stated goal of promoting and developing friendly AI in a way that benefits humanity as a whole,”* announced the release of GitHub CoPilot, which… END_OF_DOCUMENT_TOKEN_TO_BE_REPLACED

Yesterday I hit the button on my iPhone and said “Hey, Alexa.”

I was embarrassed to have gotten her name wrong.

So, am I that fucking lazy? END_OF_DOCUMENT_TOKEN_TO_BE_REPLACED

Fascinating. To me, anyway…

I just got the results back on my Ancestry DNA test.* I suppose mine are like everybody’s: they confirmed a lot of what I already knew and also threw a couple little curves at me.

A slight preface: My family has always been working folks and while official records exist, our oral history was longer on supposition than documentation. There are things we know, but a lot more we don’t.

A huge majority of my DNA traces to the British Isles. The population where I grew up is heavily Scotch/Irish and my family name traces to Scotland in the early 1700s at least. Other surnames, as well, are distinctly British and Irish (Marshall and Dillon, for instance, and Milraney). There’s a good bit more English and Welsh than I expected, although my grandmother (paternal) said she was part Welsh. And so on.

If you look at the map of where my relations – near and distant – live, it’s not too different from a map of Scotch/Irish immigration. Lots of Red country. Too much Ozark to suit me.

What I Didn’t Know

What it did find was a small trace of “Cameroon, Congo & Southern Bantu Peoples” – folks originating somewhere in the Southern half of Africa.

Given the small amount of said DNA, coupled with the absence of a perhaps similar amount of Native American, I find myself wondering about that mystery grandmother, who probably lived in 18th/early 19th century. Did she pose as Native for social reasons? Was she an escaped slave? Was the family in on the secret? Did they pass down the story that she was American Indian for safety reasons or, us being Southern and all, was it a scandal?

Or perhaps my Native grandmother never existed? Who knows where stories come from after a couple hundred years. Maybe she’s a myth and that little bit of African DNA comes from somewhere else entirely.

I can speculate all night here and probably will. I don’t imagine there’s anything remotely unusual about my family history, but I’m fascinated by these questions for the same reasons everybody else is. I want to know everything there is to know about where I came from, even though it makes not a lick of difference.

* Yeah, I know. DNA companies work with the Security State. I made this decision informed of all that. If they use it to lock me up they can pay my rent and medical bills for whatever time I have left.

This is sublime. This is technology at its best. Thanks to Frank Venturo for passing it along.

I was talking yesterday with my friend Petr, who has recently launched Expert Decision, a news and commentary site covering issues facing his native Russia. The site being in Russian, and my Russian skills being limited to a couple words, it’s been necessary to resort to the translate tool in Chrome. END_OF_DOCUMENT_TOKEN_TO_BE_REPLACED

Twin Peaks: The Return and the Red Room: a collaborative reverse spoken word

David Lynch inspired a generation of genius TV. And a moment of unfettered silliness. END_OF_DOCUMENT_TOKEN_TO_BE_REPLACED

Ghost in the Shell: a 2-minute review

The 2017 remake of the manga classic is marvelous to behold, but not especially filling emotionally.

Ghost in the Shell

Went to see Ghost in the Shell the other day. In IMAX. IMAX 3-D, to be precise. Initial impressions:

1) It’s just fucking gorgeous. The designers have studied the classics, from Blade Runner on down, and they create a world that does justice to the genre. This flick ought to win all the technical Oscars.

2) The story itself works well. END_OF_DOCUMENT_TOKEN_TO_BE_REPLACED

Remembering 2016: the year when everyone died

No, famous people won’t stop dying on January 1. But we lost too many bright lights this year and we hope that 2017 will be better. Here’s a list of noteworthy people who died in 2016.

For the past several months a lot of us have been saying we can’t wait for this damned year to be over.

2016 gave us the worst election season I can remember, and every ten minutes or so another beloved artist would die, it seemed. Any year that gives us Donald Trump and takes Muhammad Ali, David Bowie, Prince in return has done more damage than some decades.

No, people aren’t going to stop dying at the stroke of midnight tomorrow. END_OF_DOCUMENT_TOKEN_TO_BE_REPLACED

Can new procedures tell us who killed the child pageant queen? Were there multiple murderers?

According to NBC News, “new DNA testing is planned in the unsolved murder of 6-year-old JonBenet Ramsey.”

The news was first reported by NBC affiliate KUSA in Denver, Colorado, and by the Boulder Daily Camera. The two news outlets did a joint investigation in October which pointed to a variety of potential flaws in the interpretation of the DNA evidence in the case.

Boulder District Attorney Stan Garnett confirmed in a statement to NBC News Wednesday that his office had met with the Colorado Bureau of Investigation, which he said will be conducting “some further testing of the DNA evidence in the Ramsey case, as well as other cold case homicides and pending investigations,” in a new lab with new testing procedures.

There is now doubt as to the conclusions reached by former Boulder District Attorney Mary Lacy in her 2008 letter clearing the family. Specifically: END_OF_DOCUMENT_TOKEN_TO_BE_REPLACED

The once and future first daughter’s bout of reefer madness notwithstanding, please remember: “anecdotal evidence” is another way of saying “no evidence”…

Chelsea Clinton, who has been out on the stump a bit lately “helping” her mother’s campaign, recently dove face first into the muck by saying that pot can be fatal.

“…we also have anecdotal evidence now from Colorado where some of the people who were taking marijuana for those purposes, the coroner believes, after they died, there was drug interactions with other things they were taking.”

Clinton didn’t provide any details on this “anecdotal evidence,” and later one of her “spokesmen” was trotted out to explain that Chelsea “misspoke.” END_OF_DOCUMENT_TOKEN_TO_BE_REPLACED

Monorail to the Future: reasserting the American Dream for #HopeTuesday

With the 1962 World’s Fair, Seattle asserted itself as the city that invented the future. Seattle Center, home to the Space Needle, Key Arena, the Pacific Science Center and other Jetsonesque architectural wonders, gave us a stunning Mid-Century Modern vision of our presumed technotopian future. In 2000 the EMP Museum opened, inserting a postmodern generational overlay in the form of Frank Gehry’s gripping postmodern architectural style. Ever upward, ever forward.

For #HopeTuesday today, I offer you a metaphor. Let’s rekindle our dream of a clean, sustainable, prosperous future with opportunity for all – a true and attainable American dream. I took this shot of the World’s Fair monorail, which connects the EMP and Seattle Center with downtown, in November of 2013. What could possibly be more optimistic, more hopeful, for Americans than a train destined for a technological Utopia? 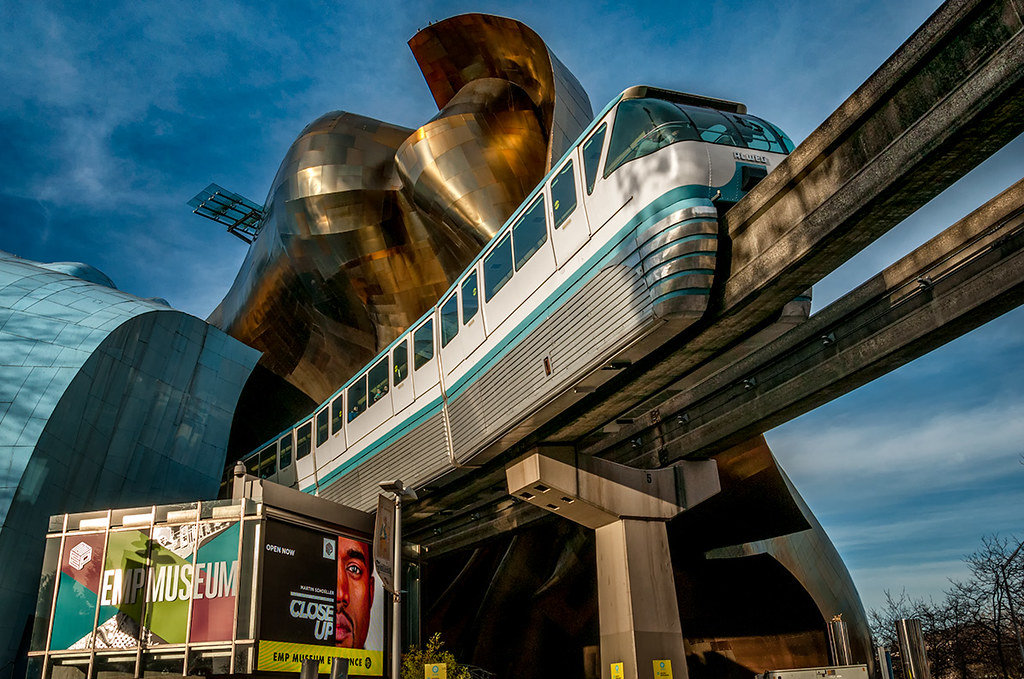 A brief snapshot from the Information (Overload) Age

In 1993, during my first year in the PhD program at the University of Colorado, we had a guest speaker in one of my classes. The subject was information technology and the Internet. He explained that at that moment, the largest repository of stored electronic data on Earth was at the National Center for Atmospheric Research, about four miles away. That building hosted two terabytes of data.

One of my external backup drives seems to be failing, so I ventured out to get a replacement. END_OF_DOCUMENT_TOKEN_TO_BE_REPLACED