Our series on lines from The Big Bang Theory that would make great band names continues apace. The second one here is among my all-time favorites.

What’s Up With Ichabod? END_OF_DOCUMENT_TOKEN_TO_BE_REPLACED 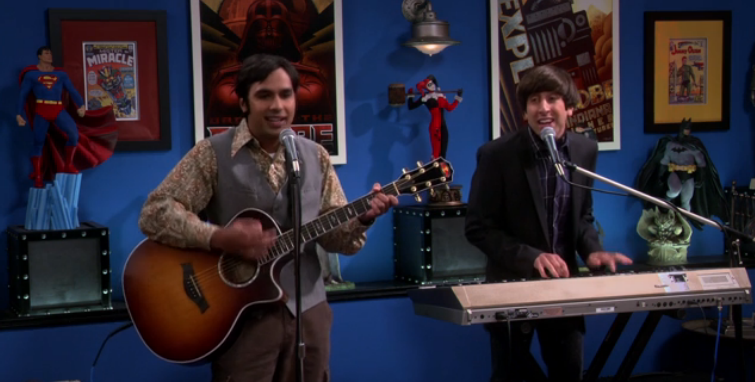 As noted last time, sometimes the dialogue in Big Bang Theory presents us with lines that just beg to be band names. Here’s my second set of 10. The first one is maybe my favorite of all.

Pretty Boys in the Big City

I love The Big Bang Theory and have watched all the episodes multiple times (some I’ve probably seen 20 times or more). I noticed that sometimes the characters say things that would make good band names. Or at least, perhaps, entertaining bands names.

I have written some of them down and will present them in a series, ten at a time. Here’s the first batch.

Dear Subway: some advice on your latest TV commercial

Have you seen the latest Subway ad? If not:

So, if I were in charge of Subway’s advertising here in the post-Jared world, I might have done things a bit differently.

1: There would be, no how no way, no conversations taking place in HR. END_OF_DOCUMENT_TOKEN_TO_BE_REPLACED

What a fucking day.

a) raise holy hell, then
b) fold like the Vichy little bitches they are.

In other news, the sun is expected to rise in the east tomorrow.

None of this is the fun part, though. First, the GOP plan would … well, just read it. END_OF_DOCUMENT_TOKEN_TO_BE_REPLACED

All I want for Christmas is this

Know what I want? One of these.

Know what I’d do with it? This. END_OF_DOCUMENT_TOKEN_TO_BE_REPLACED

Things that make you go hmmm, and can I get one of them brownies?

Chris Christie tells New Jersey residents to go see how they like marijuana-baked Colorado. Then this poll comes out.

Christie…questioned the “quality of life” in Colorado, questioning why people would want to live in a state where “there’s head shops popping up on every corner and people flying into your airport just to come and get high.”

…”For the people who are enamored with the idea with the income, the tax revenue from this, go to Colorado and see if you want to live there,” the Republican said.

END_OF_DOCUMENT_TOKEN_TO_BE_REPLACED

Online dating tips: tell OK Cupid you’re looking for the opposite of what you really want

Childless in Seattle? Not for long. Jim, let’s meet those bachelorettes.

If you were to review my OK Cupid profile, you’d find this:

And, just to be clear, this:

So today, OK Cupid e-mailed me this: END_OF_DOCUMENT_TOKEN_TO_BE_REPLACED

Extinction of the species

I had an idea for a sci-fi movie. Basically, it was about an alternate universe where humans evolved exactly the way we did here, except that our noses were upside down and we went extinct when somebody invented the shower. END_OF_DOCUMENT_TOKEN_TO_BE_REPLACED

Justin Bieber is back in Toronto. Now would be a great time to build that border fence the Republicans keep talking about. END_OF_DOCUMENT_TOKEN_TO_BE_REPLACED

I got a nice note from a woman earlier today on OK Cupid. She thought I looked interesting and wanted to take a shot, although she wasn’t 100% clear on what I meant with my answer to one question. There’s a section at the bottom of the profile where you have to fill this out. END_OF_DOCUMENT_TOKEN_TO_BE_REPLACED

Fantasy reboots: What if David Lynch had directed Caddyshack?

It started innocently enough, as these things often do, with our boy Dan Ryan on Facebook wishing there was a video of the gopher from Caddyshack dancing to “Water of Love” by Dire Straits. Which, turns out, is actually a thing. That caused me, for some odd reason, to wonder what the movie would have been like if David Lynch had directed.

Then Jim Booth got involved, and it was all downhill from there.

So here it is, our best guess as to how Lynch would have cast the film, along with some plausible plot twists. END_OF_DOCUMENT_TOKEN_TO_BE_REPLACED

Infographic: why infographics can’t be trusted

If Max Headroom were an actual person with a YouTube channel, he’d be Jay Frosting.