No one could possibly be THE voice of Gen X, but Cobain was certainly A voice of my generation.

In their seminal 13th Gen: Abort, Retry, Ignore, Fail?, published in 1993, Neil Howe and William Strauss argued that the only thing Generation Xers really agreed on was that there was no such thing as Generation X. Given the inherent irony and collective self-denial bound up in any examination of the cohort born from 1961 to 1980, then, maybe Kurt Cobain was the Voice of His Generation.

Yeah, I’m being a little tongue-in-cheek here, but not as much as you might think. Gen X is a subject I have studied deeply through the years, and if trying to characterize any demographic that’s 50 million people wide is a tricky enterprise, it’s doubly so with m-m-my generation because we’re so goddamned contrary. END_OF_DOCUMENT_TOKEN_TO_BE_REPLACED

More than marketing: The Blueflowers and the New Wave of Americana

I’ve never much cared for the musical genre broadly known as Americana, and lately I’ve been thinking about why this is. I suppose it’s acceptable to say hey, I’ve listened to a lot of these artists and most of them just kinda bore me, but that seems unsatisfactory for a guy who thinks about music like I do.

After some reflection, I think it comes down to a couple of issues. The first one, I admit right up front, is objectively unfair of me, but there is a part of me that associates Americana with the Baby Boomers, and in particular sees it as a late, faint attempt by the post-Reagan iteration of the cohort to recapture lost authenticity. END_OF_DOCUMENT_TOKEN_TO_BE_REPLACED 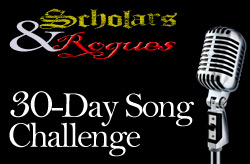 I talk a lot about generational dynamics and have been known to criticize the collective shortcomings of the Boomers and Millennials. I’ve also allowed that my generation (X) has some failings of its own, and one of them is that our cynicism can get the best of us. In fact, sometimes it almost seems to define us. As much as I hate it, I think we’re going to go down in the history books as the Whatever Generation.

And I admit it – I have my own cynical streak, and sometimes it threatens to take over completely. END_OF_DOCUMENT_TOKEN_TO_BE_REPLACED

Here’s another in our occasional unsolicited shout-outs to people and groups we like.

You’re probably hooked into a variety of social networks, but Rock & Roll Tribe is a little different. It is, as the tag line suggests, a “community for kickass grown-ups.” Music is at the center of most conversations, but it’s more than that. It’s a social net that’s by, of and for those of us whose spirits are younger than our knees. That’s how I see it, anyway. In addition to the online activities, RnRT is also pushing local get-togethers and inviting meaningful contributions from folks like you.

One of the founders is the eminent Bruce Brodeen, he of Not Lame renown. And that alone makes it cool.

Jon & Kate: a sign of the times to come

If you’ve been off-planet for the last few months you may have missed the news: Jon & Kate have split, and in the process migrated from the relative banality of the TV listings over to the hyper-banality of the tabloids. I’m still not sure what the future holds for the popular “reality” show, but whatever it is, Gosselin family 2.0 equals Jon minus Kate.

It occurs to me that these events represent something significant in our culture. Since about 1980 or so we’ve been in one of our periodic “childrens is the most preciousest things in the whole wide world” phases. (For more on the generational cycles that produce this dynamic, see Generations, 13th Gen and Millennials Rising by William Howe and Neil Strauss, two men whose work I have referenced a number of times in the past.) In the previous generation (Gen X), children were an afterthought for most parents, who had been socialized in far more self-centric times. END_OF_DOCUMENT_TOKEN_TO_BE_REPLACED

Educating the 21st Century cyberstudent…or not?

Don Tapscott has some radical new ideas about education. Here’s a sampling (as related by ReadWriteWeb):

(These last two are quotes directly from Tapscott, by the way, and I need to go pick up this book. It seems awfully interesting – but for now the RWW report will have to do.)

That one item – “Teachers are no longer the fountain of knowledge; the internet is…” – is among the most terrifying concepts I’ve ever run across, by the way. END_OF_DOCUMENT_TOKEN_TO_BE_REPLACED 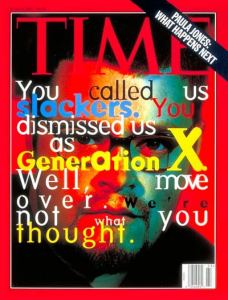 Further, some have erroneously interpreted my critiques as somehow suggesting that my generation – X – was without flaw. Which, of course, is ridiculous. Every generation has its relative strengths and weaknesses, and X has been a trainwreck in some respects.

All of which leads me to the other morning, when fellow scrogue Brian Angliss forwarded along the link to a Washington Post column from Neil Howe, the man who co-authored, along with William Strauss, the finest series of works on America’s generations I’ve ever encountered. END_OF_DOCUMENT_TOKEN_TO_BE_REPLACED

WordsDay: The hegemony of poetry vs. lyrics, part 2 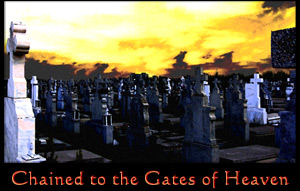 A couple weeks I go I offered up part one in a series on poetry vs. lyrics, noting from firsthand experience the differences between the two. In brief, I’ve always felt like it was wrong to call rock stars poets – even if their words are fantastic, as they often are, the very nature of bending words to suit a song structure makes what they do a very different thing from what poets do.

In that piece, I looked at the song version of “Hegemony,” which I penned for Fiction 8‘s most recent CD, Project Phoenix. “Hegemony” was adapted for music from an existing poem, which I wrote for my most recent book, Chained to the Gates of Heaven (a book that is in search of a publisher, by the way – so if you know somebody….)

WordsDay: the hegemony of poetry and lyrics

We’re fond of calling our great rock stars poets. Dylan is a poet. Springsteen is a poet. John Lennon was a poet. Jim Morrison (*gag*) was a poet. And so on. Certainly the first three (have) produced some marvelous words, but as a poet – forgive me if I call myself a “real” poet here – I’ve never quite been willing to accord their work the status of poetry. This isn’t necessarily a slam – their work isn’t architecture, either. END_OF_DOCUMENT_TOKEN_TO_BE_REPLACED

Bill Strauss, who co-authored a number of important books on generational dynamics, is dead at 60.

This is a great loss. Strauss and his colleague Neil Howe were responsible for some of the most insightful and important analyses ever done into American generations. Thanks to them we now have a heightened ability to understand the cyclical nature of generations, affording us a tremendous capability to anticipate coming trends.

13th Gen: Abort, Retry, Ignore, Fail, their examination of Generation X, literally changed my life. Up until I discovered it in th early ’90s I had no idea about the broad economic and social factors shaping what I thought was my own personal little hell. END_OF_DOCUMENT_TOKEN_TO_BE_REPLACED

I’ve written recently about some generational issues facing companies – most notably the “macro-succession crisis” that I suspect very few corporations have even thought about in meaningful detail. In that post I examine how the coming Baby Boomer retirement explosion is going to engender all kinds of crisis, especially in larger legacy corporations that are so top-heavy with Boomer leaders that their Gen X successors are ill-prepared for the transition that must begin taking place in the next five years.

But if you’re a different kind of company – say an entrepreneurial outfit started and run by front-edge Xers (people now in their early to mid-40s) – you’re in good shape, right? END_OF_DOCUMENT_TOKEN_TO_BE_REPLACED

I wrote a couple weeks ago over at Black Dog how companies across the US are flying headlong toward a massive macro-succession pile-up, and the collective personality of the Millennial Generation (born from ~1980-2000) is going to play a major part in mid-management breakdowns in the next few years.

If you’d like a glimpse of the stress the Millennials are already exerting on organizations, you’ll want to read a new analysis from the Wall Street Journal‘s CareerJournal.com site. In it, Jeffrey Zaslow chronicles how businesses are addressing the Mills’ excessive need for praise: (More at Black Dog Strategic…)

I was reading a Seattle Times story earlier today on how men in their 30s are earning less than their fathers did. An interesting story top to bottom, but the concluding section drew me back around to something that I really haven’t talked about enough lately – the looming generational macro-succession nightmare facing corporate America. (Read the rest at Black Dog…)