America’s Negro Cracker Problem: none of us are free

There’s a rising tide on the rivers of blood
But if the answer isn’t violence, neither is your silence

When all is said and done, nothing communicates the racism and knee-buckling stupidity of all-too-wide swaths of our nation quite like video. So if you don’t trust me to tell the truth about these folks, maybe you’ll trust their own words.

Here, for your copying-and-pasting convenience, is a transcription of some of what you just heard:

“I’m afraid if he wins, the blacks will take over. He’s not a Christian! This is a Christian nation! What is our country gonna end up like?”

“When you got a Nigger running for president, you need a first stringer. He’s definitely a second stringer.”

“He seems like a sheep – or a wolf in sheep’s clothing to be honest with you. And I believe Palin – she’s filled with the Holy Spirit, and I believe she’s gonna bring honesty and integrity to the White House.”

“He’s related to a known terrorist, for one.”

“He is friends with a terrorist of this country!”

“He must support terrorists! You know, uh, if it walks like a duck and quacks like a duck, it must be a duck. And that to me is Obama.”

“Just the whole, Muslim thing, and everything, and everybody’s still kinda – a lot of people have forgotten about 9/11, but… I dunno, it’s just kinda… a little unnerving.”

“Obama and his wife, I’m concerned that they could be anti-white. That he might hide that.”

“I don’t like the fact that he thinks us white people are trash… because we’re not!”

As I always told my writing students: show, don’t tell.

Welcome to a state where the politics of hate
Shout loud in the crowd “Watch
them beat us all down.” 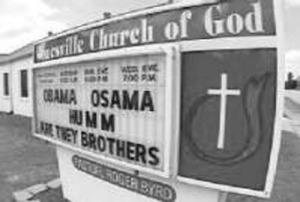 At this point, I’m trying to imagine what I can add that isn’t superfluous. That racism still exists, in tragic amounts, isn’t a revelation to anyone with more than six or seven functioning brain cells, although being confronted anew with this kind of evidence is still jarring.

What’s different, though, is what I said back in June.

Make no mistake, in the coming months you’re going to see the ugliest artillery that our nation’s drooling, inbred hatemongers have at their disposal. The looming prospect of a nigra in the White House is going to bring the vermin out of the woodwork, out from under their rocks and out into the light. It’s going to incite the well-heeled country club elite to crank up the meme machine with every sort of subtle, codemongering dogwhistle it can manufacture. The truly ignorant and hateful are going to be liquored up on rhetorical bile of the lowest sort and those who live further up the social ladder are going to be provided with a variety of messages that let them vote white without having to admit to themselves that they’re fundamentally just like the snuff-suckers in the trailer park across the tracks.

It’s a good thing because we’ll never defeat an enemy that can safely hide from scrutiny. This is a disease that’s only going to be cured with copious amounts of very bright light.

We will not fear your mask. Because what we believe in doesn’t need to hide.

In this election campaign, let’s invite the Klan and its fellow hate groups out into the light. Let’s get their hoods off of them. Let’s show all their videos. Let’s make sure that everybody gets to read their brochures and visit their Web sites. Let’s hand the microphone to their most eloquent speakers and stand aside. Let’s get them front and center and make sure America sees, in all its slack-jawed, toothless glory, precisely what racism looks like.
…
And above all, when we hear racist code masquerading as legitimate, issues-based messaging, let’s not be afraid to say “excuse me, but will you take off your hood?”

It’s decision time, and I’m ready for a referendum on hate. How about you?

Regardless of what happens on Election Day, we won’t have triumphed finally and completely over ignorance. Our culture is, at its very core, anti-intellectual and frighteningly tolerant of the willfully stupid. We fetishize shallowness and vote on whether or not we’d like to have a beer with the candidate. We mock “elites,” sort of. We’re too thick to recognize real elitism when we see it, but we can be relentless in our abuse of those born to meager means who, through little but their own intelligence and hard work, rise up to make something of themselves. Our ability for self-deception is unmatched in the entire civilized world.

But an Obama victory (which looks more likely by the day) would nonetheless mark a milestone: we would have arrived at a point where a man of non-white (or half non-white, as the case may be) heritage can be elected to our highest office. As my colleague Whythawk has observed, that actually says something pretty good about America, given how few of our fellow industrialized nations can say the same.

“We suck less,” though, isn’t the sort of shining-city-on-the-hill standard America has traditionally prided itself on setting (even if only rhetorically), and while being the first to clear a very low bar is something to note, it’s not something to get too puffed up over. This is especially true when we have millions of citizens howling for the corpse of Barack Obama. It’s especially true when our media institutions ignore the filthiness happening right before their eyes. It’s especially true when these disgusting public spectacles are funded by a hyper-rich power elite that’s willing to spend whatever it takes to keep us ignorant and at each other’s throats.

As for the premise that McCain is no racist, well … racist is as racist does, don’t you think? He got his back up at the suggestion that he was somehow like George Wallace, but in what conceivable way is that charge less fair and valid than the slanders his campaign has slung in Obama’s direction?

And why should we taken seriously McCain’s late-to-the-dance attempts to rein in the hate that’s been committed in his name? His actions in recent years have made clear that he’s willing to do whatever it takes to win the White House, Bob Dolizing himself to a degree that Dole himself could hardly have imagined. Tack this way on the advice of advisers, pander to the Right to shore up the base, let Karl Rove bully you out of your VP preference, let slip the dogs of Race War… Why would I or you or any other thinking American regard this as anything besides a tactical maneuver driven by research showing that undecided voters are turned off by it?

None of Us Are Free

In “None of Us Are Free” (written by Barry Mann, Brenda Russell and Cynthia Weil), Solomon Burke sings

Clearly, large portions of America remain chained. Our Cracker Problem persists, and what ought to be most disconcerting is that it not only exists in the heart of Georgia, in Outback Ohio, in pro-America Virginia or in a Republican Women’s club in California. It not only thrives in the minds of elderly whites who preferred Jim Crow to Martin Luther King. It’s not only alive and well in organizations like Stormfront and the League of the South.

No, the problem is that racism, racemongering and race-baiting are alive and well at the very highest, most public levels of our democracy: our presidential election process. And it was put there, on full display, and sanctioned by one of the only two parties that ever really stands a chance in any national election.

On November 4th, let’s hope for an epic thrashing of those who seek to profit by trading in hate and ignorance. Let’s further hope that those who can’t and won’t evolve get the message loud and clear: crawl back underneath your rocks and remain quiet until it’s finally your time to die.

But whatever we do, let’s not confuse winning a battle with winning the war. Our Cracker Problem will be with us for awhile longer, and November 5th will be the beginning, not the end.

And when they come to ethnically cleanse me
Will you speak out? Will you defend me?
Or laugh through a glass
eye as they rape our lives
Trampled underfoot by the Right on the rise…